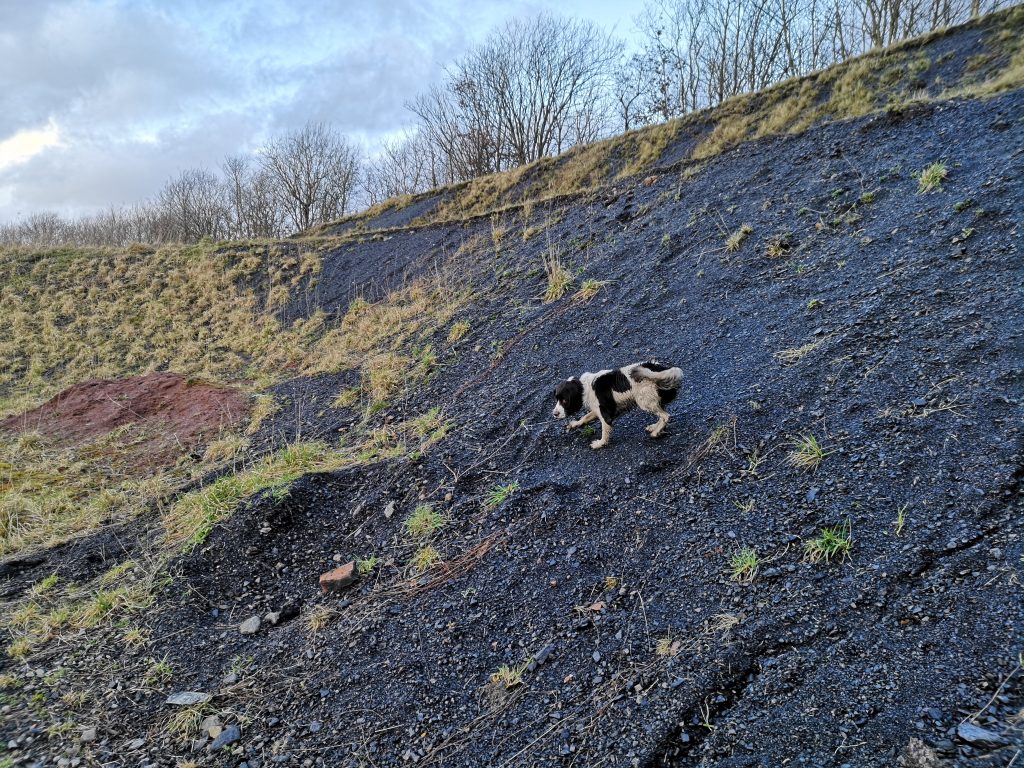 Remnants of South Wales’s industrial past abound in the area, particularly in the form of colliery spoil heaps (coal tips) like this one. Although landscaped, there are plenty of areas of bare spoil to look through.

From the south:
♦ Take the A469 from Caerffili (Caerphilly) to Ystrad Mynach, then take the A472 towards Pontllanfraith and Coed Duon (Blackwood).
♦ At the Crown Roundabout at the top of the hill, take the first left, then turn left again at the next roundabout onto the A4049.
♦ Follow the A4049 for several miles through Fleur de Lis and Pengam, until you pass an industrial estate on the right with yellow buildings and come to a roundabout with Aberbargoed Fire Station on the left.
♦ At the roundabout, take the second exit, which brings you to a short section of road by a pair of locked metal gates. Park here.

From the north:
♦ Leave the A465 Heads of the Valleys Road at Rhymni (Rhymney) and follow the A469 south through Pontlottyn. Then take the A4049 to New Tredegar and continue south until you reach the roundabout next to Aberbargoed Fire Station
♦  At the roundabout, take the third exit, which brings you to a short section of road by a pair of locked metal gates. Park here.

Once you have parked, as you are looking at the main metal gates (which are padlocked shut), you will see an open cycle gate in the fence to your right and just behind you. Go through the gate and follow the fence until you are behind the locked metal gates. The exposed areas of shale debris begin on your right.

FIND FREQUENCY: ♦♦ – It can take a while to get your eye in, but fossils are fairly abundant in the shale spoil. To find anything but very small fossils takes a bit of effort, as much of the shale is fractured into small pieces.
CHILDREN: ♦♦♦ – The spoil heap has been landscaped and is stable enough to be safe for children. However, there is very little here to keep them occupied other than the spoil heaps, so it may not be suitable for very young children as they will easily get bored.
ACCESS: ♦♦♦ – Parking is free but limited, being in a short section of road next to a roundabout. Access by foot is fairly easy, but be aware that the ground can be uneven and very muddy in places.
TYPE: – Spoil heap – Fossils are found mainly in the exposed banks and drainage ditches, but there are also areas of abundant surface rocks among the flatter grassy areas.

This site forms part of Parc Coetir Bargod or Bargoed Woodland Park. This comprises the landscaped remains of what was once the largest coal tip (spoil heap) in Western Europe, belonging to Bargoed Colliery. The coal seams below the valley floor are closely associated with layers of black shale. Pieces of this were mechanically separated from the useful coal after being brought to the surface, then dumped here.

Much of the spoil heap is now covered with trees and vegetation, which stabilise it. However, there are significant areas of vegetation-free banks where the shale can be explored for fossils. It is also worth looking in the banks of the drainage ditches, and there are often sizeable patches of loose pieces of shale (and some sandstone) within the grassy areas. Also, take a look at the pieces of sandstone and other rocks mixed in with the shale, as these are also often fossiliferous.

It can take a while to get your eye in, as the fossils are often black like the shales. They can be best seen at an angle, where they show up as glossy black against the dull-coloured shale. Strap-shaped Cordaites leaves are fairly common here, but many other plant species, such as Lepidodendron, Calamites, Stigmaria, Sigillaria and Sphenophyllum, can be found. There are also plenty of ironstone nodules and coal pieces to be found. It’s worth spending an hour or two here before going on to explore some of the other South Wales fossil sites.

The bedrock below the site is the sandstone of the Hughes Member (Carboniferous, Asturian). However, the shale and siltstones (with frequent pieces of coal) dumped on this site come from lower down the succession, from around the Ras Las, Red Vein and Big Vein coal seams of the South Wales Middle Coal Measures Formation (Carboniferous, Westphalian), around 577m to 650m below the surface.

The trees and vegetation here help to keep the old spoil heap stable and the area has been landscaped, so the risk of a landslip is very low. However, be aware that there are several drainage ditches crossing the area, which can be filled with water in heavy rain. Most of these have timber bridges or crossing points. The slope at the western edge of the site is quite steep in places, so take care if you venture in that direction.

Your most important tool at this site is your eyes, as fossils can often be found lying on the surface. A geological hammer and chisel may be useful to split larger pieces of shale, although the more heavily weathered pieces can often be split by hand. A trowel or similar might come in handy to prise out lumps of shale from the banks. You will need something to wrap your finds, such as bubble wrap or newspaper, as they can often be fragile.

There are no known restrictions, and the site is open to public access as part of Bargoed Woodland Park (which is largely made up of reclaimed industrial land).