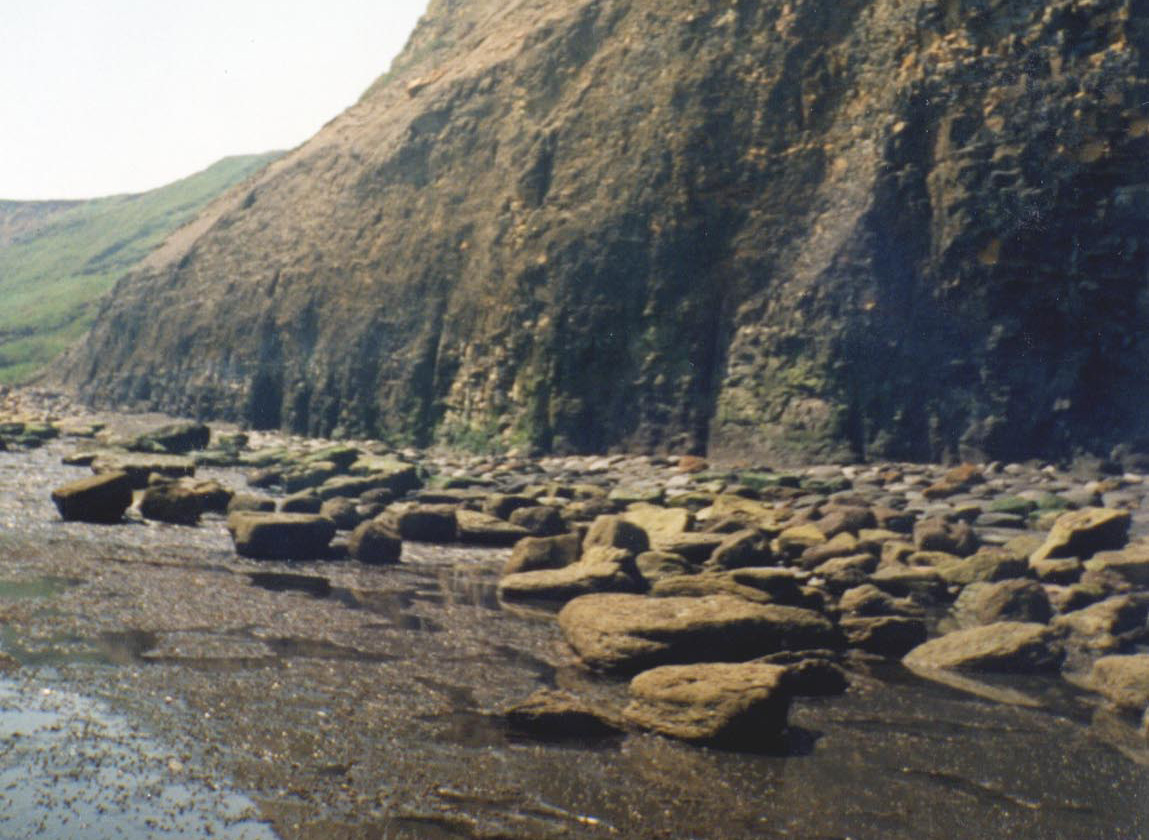 You can find reptile remains on the foreshore, along with many ammonites and shells. One of the problems is that the foreshore is extremely slippery and there are very few rocks to search through. It can also be covered with algae.

FIND FREQUENCY: ♦ – Although some superb reptile remains have been found at Sandsend, the foreshore is dangerous, often covered in algae and there is little in the way of boulders.
CHILDREN: ♦ – Due to dangerous conditions, this location is not recommended for families.
ACCESS: ♦♦ – The location is easy to access, but dangerous to collect from, as the foreshore is extremely slippery.
TYPE: – Most of the fossils are found on the foreshore, often after cliff falls.

Most fossils are found after cliff falls at Sandsend. This is normally after storms during the winter months. However, fossils can also be found in the rocks and boulders on the foreshore. There are not many of these along the foreshore, as the sea comes in so high that any boulders tend to get moved out to sea. At Sandsend, the Upper Lias, especially the shales on the foreshore, yield the odd ammonite, along with ichthyosaur bones and other reptiles. In fact, Sandsend is quite famous for reptiles, especially after cliff falls.

During Toarcian times, a global rise in sea-level led to the deposition of finer grained mudstones, collectively known as the Whitby Mudstone Formation, in the Cleveland Basin in contrast to the shallower water sediments of the Staithes and Cleveland Formations.

A regional phase of uplift & erosion resulted in a non-sequence with the overlying shallow marine Dogger Formation resting, with a strong erosional base, on the Alum Shale Member.

Common sense when collecting at all locations should be used and knowledge of tide times is essential. The cliffs here are extremely dangerous, not only because of the extremely high tides reaching in many places one metre up the cliff face, but also because of falling debris. It is far too dangerous and not necessary to dig in the cliffs, as the foreshore is the best to collect from. However, the foreshore is very slippery with seaweed, so care must be taken at all times.

A Pick is the most important tool. A Hammer and splitting chisel are recommended too but a good eye is often all you need. A knife will also come in handy. Suitable footwear should also be worn. Any fossils should be wrapped well and placed carefully into containers.