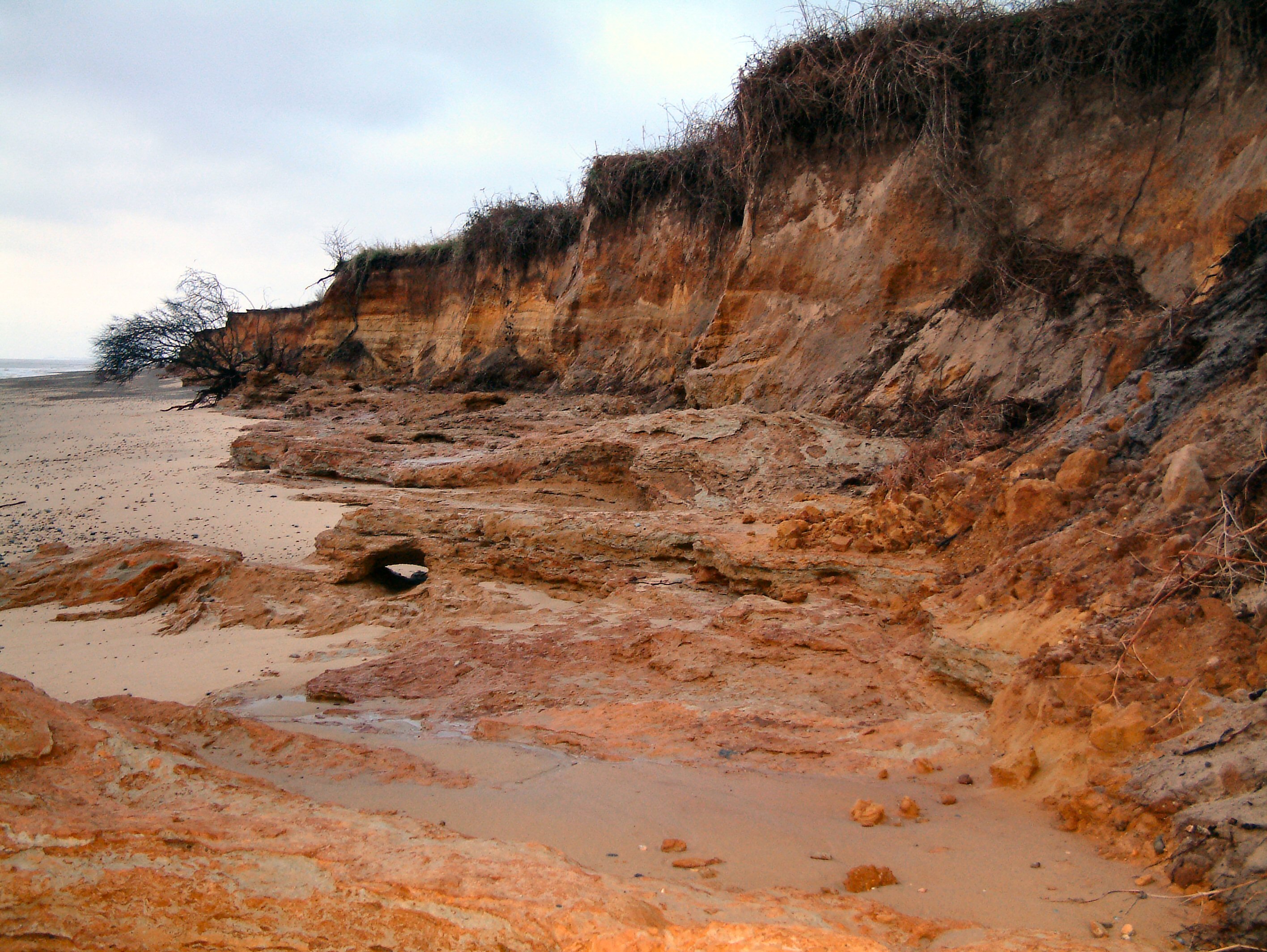 The glacial pebble beds at Benacre yield a range of derived fossils including echinoids, sponges, shells and belemnites. At the base of the cliff, the Baventian Clay is several metres thick.

♦ To get to Benacre from Wrentham (A12) or from the B1127 towards Covehithe, follow the road to Benacre until you reach the church. Park on the side of the road and follow the road ahead, walking through the old part of the closed road. You will find a footpath to the north, which will take you along the top of the cliff.
♦ Continue north until the cliff ends. You will then cross over Benacre Broad. The cliff is the next cliff after this broad.
♦ Ref: 52.38985°N, 1.72233°E

FIND FREQUENCY: ♦ – Benacre is a glacial location and occasionally fossils can be found in flints that have been re-deposited. However, these are very rare. This is not a location for anyone just interested in fossils. Rather, it is suitable for those interested in glacial geology.
CHILDREN: ♦ – Because fossils are rare, this location is not suitable for children wanting to collect fossils
ACCESS: ♦♦♦♦ – Benacre is easy to get to. There is a sandy beach, which makes for easy walking and it is not far from parking.
TYPE: – Although fossils are very rare, flints found directly in the cliff or on the foreshore can occasionally contain some.

Echinoids and sponges can occasionally be found in the glacial pebble beds, which have been brought down from the north during the Ice Age. Belemnites have also been found. Many chalk fragments can be seen with the pebbles and these can also contain shells. Most of the fossils are washed out from the pebble beds and these derived fossils mostly originally came from the chalk, re-deposited during the Ice Age.

The foreshore is covered in pebbles and you can often simply stroll along the beach and pick up fossils. Also, search the pebble beds themselves. You need to have a good eye for the right shapes.

The glacial beds at Benacre are a fantastic example of sedimentation during the Ice Age. Below the glacial silts, the sands, clays and pebble beds are the continuation of the Baventian Clay, but, at Benacre, evidence of disturbance can be seen in this bed.

Baventian-aged clays dates from 1.5-1.6 million years ago and were formed during a cold period. The glacial sands/gravels and tills are laid on top.

The cliffs at Benacre also reveal easily-eroded sands and clays of the Norwich Crag Formation, deposited in shallow marine conditions about 1.8 million years ago.

Common sense when collecting at all locations should be used and knowledge of tide times is essential. The sea often reaches the cliffs at Benacre, so collecting should be done on a falling tide. It is also easy to become cut off, especially at the northern end of the cliff. This constantly crumbles and its structure means they can suddenly slump or landslide. Therefore, keep away from the base.

The fossils from Benacre are usually washed up from beds exposed further out to sea or are fossils that have from Covehithe and Easton Wood Cliff. Therefore, this is one of those locations where tools are not required.