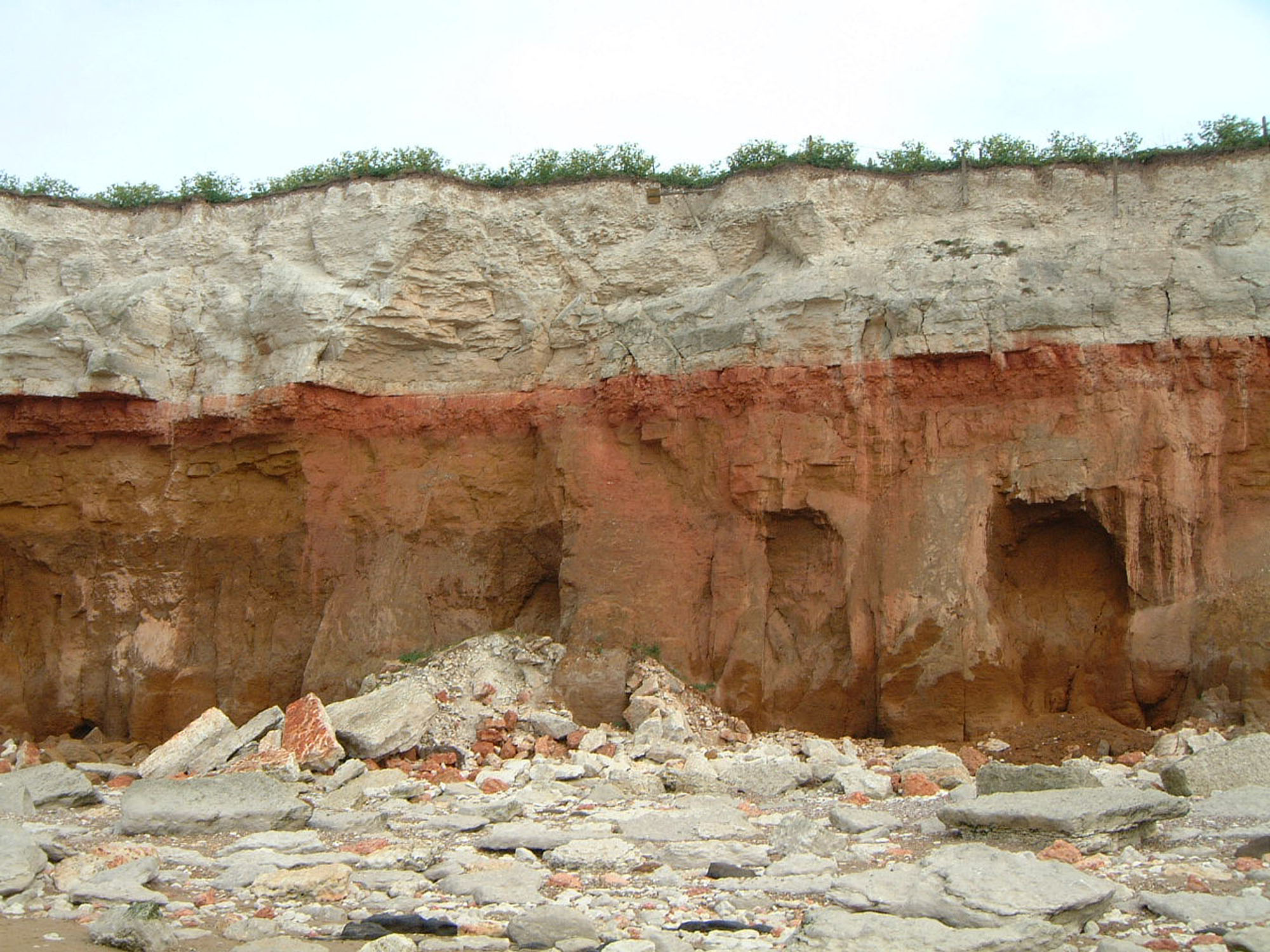 The famous red and white cliffs of Hunstanton are visited by thousands of people each year simply to see this spectacular natural geological feature. The Red Rock and White Lower Chalk are rich in fossils including echinoids, fish, sharks’ teeth, bivalves and brachiopods, ammonites and more.

♦ Access to Hunstanton is relatively easy. Head towards Old Hunstanton and once you reach the town, the beach is clearly signposted. From here, there is a large car park from where you can descend directly to the beach. Once on the beach, walk southwest.
♦ Alternatively, should the car park be closed, you can continue to drive west along the sea front and park on the side of the road. You can also drive to the bottom of the sea front and access the beach from some steps at the western end of the cliffs, and then walk north-north-east to access the cliffs.
♦ Ref: 52.95045°N, 0.49486°E

FIND FREQUENCY: ♦♦♦♦♦ – Hunstanton is a very productive site. Of course, fresh cliff falls are ideal, but if there has been none, providing you take a heavy hammer with you, you are sure to come back with some good finds.
CHILDREN: ♦♦♦♦♦ – Although Hunstanton is suitable for families, children should stay clear of the cliff face. This location is famous for its sandy beach, which makes it ideal for families.
ACCESS: ♦♦♦♦ – There is easy parking nearby at Hunstanton, with good access to the beach.
TYPE: – Hunstanton is a cliff location and fossils are mostly found in the rocks near the cliff.

The fossils from the Red Rock are similar to those of the Gault Clay. Among the ammonites are: Beudanticeras sphaerotum, Euhoplites ochetonotus and Hoplites canavariformis. The Red Rock also yields corals, such as the solitary coral, Trochocyathus sp, scaphopods (Dentalium decussatum), worm tubes (Serpula umbonata), bivalves (including Inoceramus anglicus and Neithea sp.) and the brachiopod, Moutonithyris sp. In addition, belemnites are common, with Neohibolites minimus and Actinocamax plenus being the most common. From the Lower Chalk, fish and shark remains are well known, with the species Hexanchus gracilis, Scapanorhynchus subulatus and Cretolamna appendiculata being found together with echinoids and their spines, brachiopods such as Ornatothyris sp., worm tubes (Serpula sp.), bivalves (Inoceramus sp.), corals, ammonites and sponges.

Ammonites from the Basal Carstone Bed are sometimes washed up and exposed on the foreshore. These are in superb condition, but unfortunately quite rare.

During scouring conditions, ammonites have been found in the nodules exposed in the Carstone on the foreshore at extreme low tides.

At Hunstanton, the Lower Chalk overlies a conspicuous bed called the Hunstanton Red Rock (or Red Chalk). Although these two beds are different in appearance, a mineral analysis shows that there is a gradual passage between them, which is one of the reason why the Red Rock is also known as the ‘Red Chalk’. Below this, a sandy bed, which is heavily mineralised, forms the Carstone. In the Carstone, fossils are restricted to this base, and only some 10m of Carstone intervene between this horizon and the fossiliferous beds of the Red Rock.

Three bands can be recognised in the Hunstanton Red Rock: the lowest is deep-red and gritty and contains abundant quartz pebbles; the middle is a rough nodular red limestone; and at the top is a bed of hard, light-red or pink mottled limestone. At the very top of the cliff, a reddish brown boulder clay can be seen, which also occurs at other places along the northern coast of Norfolk. This boulder clay formed during the last ice retreat and contains erratics that are different from those of previous glaciations – they include grits and igneous rocks similar to those found in the Cheviot Hills.

Common sense when collecting at all locations should be used and knowledge of tide times is essential. The main issue to be aware of is the tide and falling rocks. Keep away from the base of the cliff and hard hats are recommended. During bird nesting season, rocks can crumble from the high cliffs. Stay away from the cliff edge during these periods.

Hunstanton rarely scours, but, when it does, beautiful, mollusc shell beds can be seen and bones may be washed up. The problem is you never know when this will happen. If you can, try to split the grey coloured rocks using a 3″ (or better 4″) splitting chisel or use a pry bar and hammer to pry open rocks where natural weathered cracks occur. Eye protection is essential.