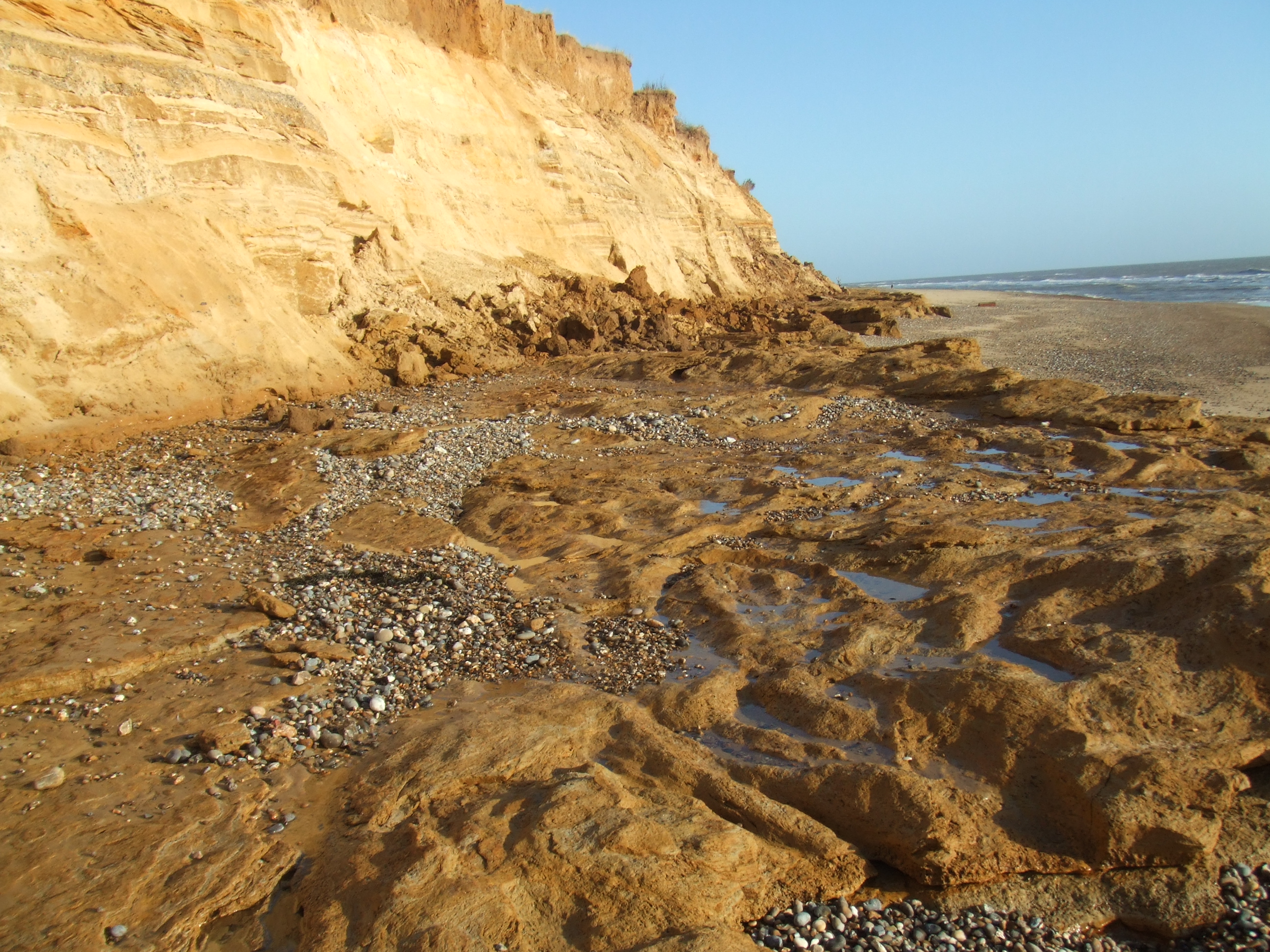 Unlike the other nearby Norwich Crag locations, Covehithe does not yield mammal remains, although they can occasionally turn up, washed from the seabed or from nearby Easton Wood. What makes Covehithe interesting is a series of thick shell beds below beach level, where shells are exposed in life position, along with a black carbon layer containing fossil seeds. This is the only place where these can be found in the Pliocene Crags. Glacial flint fossils can also be collected.

♦ From the A12 at Wrentham, take the road to Southwold from the crossroads. You will then pass the ‘Five Bells Pub’ on the right. Shortly after the pub, take the road on the left signposted to ‘Covehithe’ Drive all the way down the road until it reaches a corner where it turns back on itself, with another road continuing ahead. Here, the road layout has changed. It used to take you past the church without any junctions, but the junction has been moved, with the main road now turning back on itself.
♦ Parking is no longer permitted past the new junction layout. Instead, just before the corner, a road side parking area has been designated. There is enough space for about ten cars, between two sets of double lines. From here, walk down the road ahead of you. Before the church, you will see a footpath on your right signposted to ‘The beach’.
♦ Follow this round the field and then veer right through the wooded area. This will eventually take you to the beach. Once on the beach, walk next to the cliff you have just walked down.
♦ Ref: 52.377184, 1.712151

When visiting this site, search along the foreshore among the flints, because glacial deposits at the very top of the cliff yield echinoids and sponges, which were brought down from the north during the last ice age. These cretaceous rocks are erratics, but many of the fossils are in excellent condition. In addition, Covehithe is a very popular location for Neolithic flint tools. Axe heads are the most common, but a variety of scrapers and various other tools have been discovered along the foreshore.

If you visit during scouring conditions, a clay platform will be visible. Because this is very hard, it becomes very prominent during such conditions, so is easy to identify. There is only one section where fossil shells can be found, which is the area in line with the old road, near to the church. Therefore, you need to walk back along Covehithe Cliffs to roughly where the footpath first started. These shell beds last for around 50m and contain bivalves (Macoma calcarea, Serripes groenlandicus and Yoldia myalis). Scattered examples of Macoma calcarea can also be found in life position within the clay platforms.

Sands at the base of the cliff also contain similar shells. In recent years, a thin carbonaceous bed running along the base of the cliff (since obscured) has yielded a large number of fossil seeds and foraminifera. Up to now, no mammalian remains are known from Covehithe and the Norwich Crag is present here mainly below the level of low tide.

Covehithe’s crumbling cliffs are a feast of geological features; the sediments show an intricate variety of colours, shapes and textures. The best time to see them is in winter and spring, when storms have freshened up the exposures and scoured the beach. The most geologically significant strata belong to the Norwich Crag Formation. Pale, blue-grey clays with rusty mottling form a distinctive platform feature at beach level. These are the remains of intertidal mudflats about 1.8 million years old, and contain desiccation cracks and fossil worm burrows.

At the top of the cliff, glacial flint, gravel and sands provide excellent examples of fluvial glaciation processes. These cliffs have probably the youngest Norwich Crag deposits in the area, consisting of unconsolidated sands and clays undergoing extreme erosion. During scouring conditions, a clay platform can be seen exposed on the foreshore at low tide. Molluscs can be found in life position from a silty seam containing a slightly transported low arctic assemblage dominated by Macoma calcarea.

Evidence from pollen and marine microfossils show that the climate was cold, and the environment was grassy heathland with sparse tree cover similar to parts of northern Scandinavia today. This time period is known as the Baventian, named after similar deposits at nearby Easton Bavents. Fossil shells may be found in the cliffs or even mingled with modern shells washed up on the beach; they include species now only found in Arctic regions.

The main part of the cliff is a complex of sands and gravels. The lowest layers belong to the Westleton Beds of the Norwich Crag, and were deposited in offshore sand and pebble banks. Quartz-rich marine sands and gravels of the Wroxham Crag Formation are found higher up. Brown glacial clays of the Lowestoft Formation of Anglian age cap the cliff, and were deposited beneath an ice sheet, perhaps 450,000 years ago. The sequence illustrates a general cooling of the climate in the early Pleistocene period. Tapering ice wedge casts caused by downward- growing fingers of ground ice can sometimes be seen in the sands and gravel.

Common sense when collecting at all locations should always be used and prior knowledge of tide times is essential. The cliffs at Covehithe are very unstable, especially during winter months. Both rainwater, which accumulates above the clay and can cause sudden cliff falls without warning, and overhanging cliffs caused by sea erosion, are two reasons the cliffs are so unusable. Keep away from the base of the cliff at all times. Sinking sand after high tides can also be a danger.

Most fossils can simply be collected by picking them up off the beach. When exposed, the shells from the shell beds are extremely fragile and the only way of ensuring they do not break is to harden onsite using PVA, or by taking a lump of clay with shells home and preserving them there.