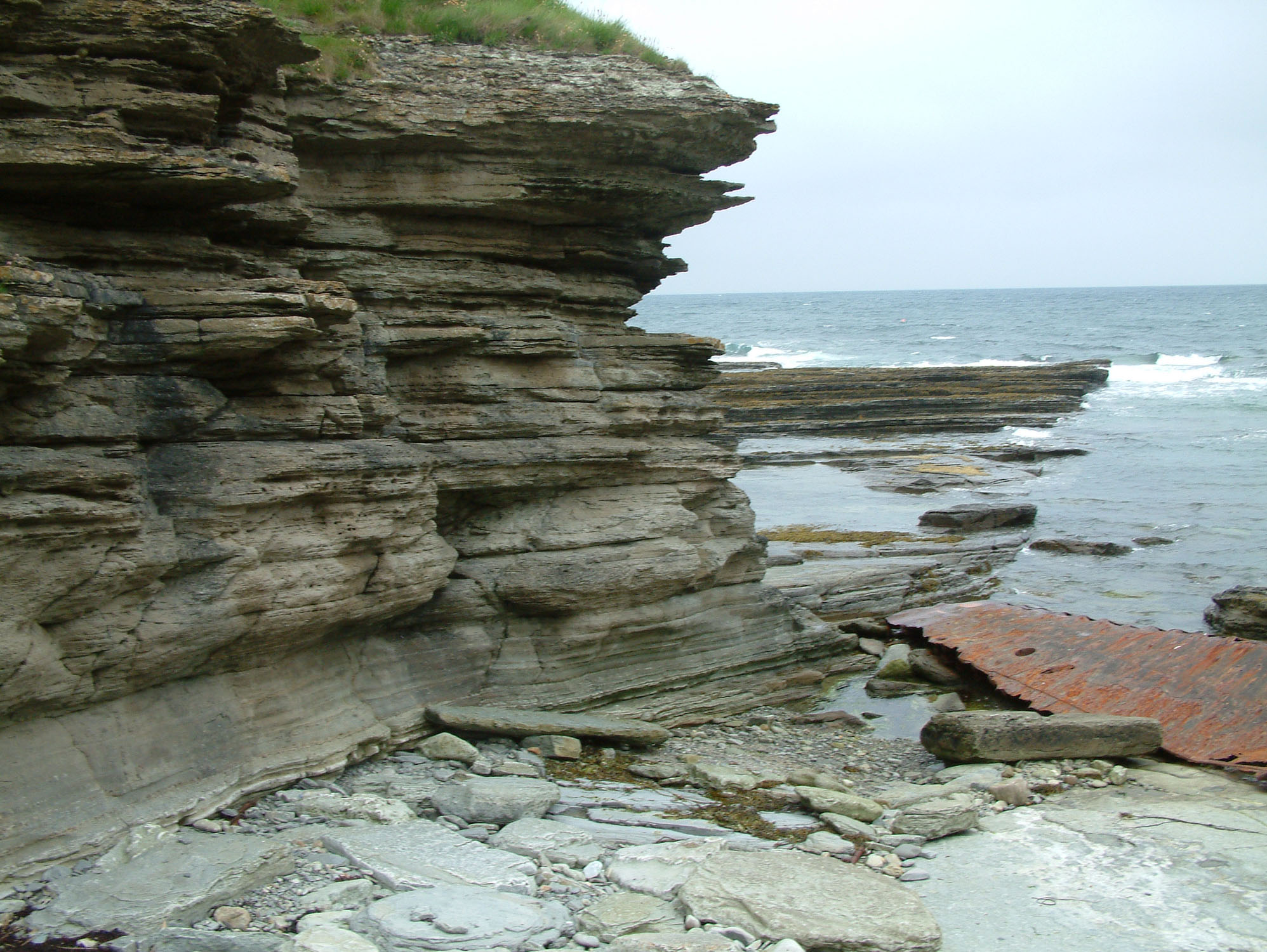 Thurso is famous for its rich fish beds, and fish remains (especially scales) can be found everywhere along the foreshore – the rocks are full them. Fish teeth and complete fish have also been found.

♦ Head towards Thurso from the A9. As you enter the town from the south, you need to keep to the eastern bank of the river (the River Thurso), so do not cross the bridge. Rather, turn off at the A836 towards East Thurso and the ruined castle.
♦ The road runs straight, but you will see a small turn off at the end of the straight section. Take this and follow it all the way around, past the castle. You will then see a large farm. From here, the road changes to a wide track taking you to a large car park.
♦ Park here and walk east to the beach. It is not long before you start to see fish fragments in many of the rocks.
♦ Ref: 58.59973°N, 3.50745°W

FIND FREQUENCY: ♦♦♦♦♦ – The Devonian rocks here are highly fossiliferous and rich in fish remains
CHILDREN: ♦♦♦♦♦ – Thurso is not suitable for families, as the foreshore can be very slippery and it quite rocky.
ACCESS: ♦♦♦ – This location has good access to the beach, although the foreshore is rocky. However, you do not have to walk far and there is a car park, which leads directly onto the beach.
TYPE: – Fossils can be found either on the foreshore platforms, in the cliff face or within small boulders.

When you visit any location for the first time, it normally takes a long time before you start to find any trace of past life and then, gradually, you start to ‘get your eye in’. However, finding fossils at Thurso can start almost immediately, with fish fragments in most of the rocks. Fish scales can be seen everywhere and sometimes rocks full of scales can be split from other fragments. Most of the slabs are very large, or exposed in the form of a single foreshore platform. Further up the cliff, complete fish have been found in nodules, but these are very rare.

The most common type of fish here is an armoured fish (Homostius milleri) and its shield is quite common. As you walk east, the fragments seem to get bigger. Generally, fish scales are the most common fish remains and can be found everywhere. Whole fish have been found in the Mey Subgroup and, further up the cliff, they can be found in nodules, but they are very rare. Some rocks contain a tinted blue-coloured fish and others are black. These are two different species of fish.

The Devonian Caithness Flagstone Group from the Eifelian substage, at Thurso is rich in fish remains.

Southwest of Thurso, the Latheron Subgroup, followed by the Spittal Beds, is well exposed. These are the same sediments as in the Spittal quarry. These sediments can contain other species of fossil fish.

Common sense when collecting at all locations should always be used and prior knowledge tide times is essential. The coastline at Thurso is very dangerous, because the tides always reach the base of the cliff and come in very quickly. Therefore, always return before the tide turns. Surfaces can also be very slippery, so care must be taken when walking over the areas of seaweed.

The Caithness Flagstones are extremely hard, but can be split, providing you have the correct tools. These include mallets, chisels and safety goggles.