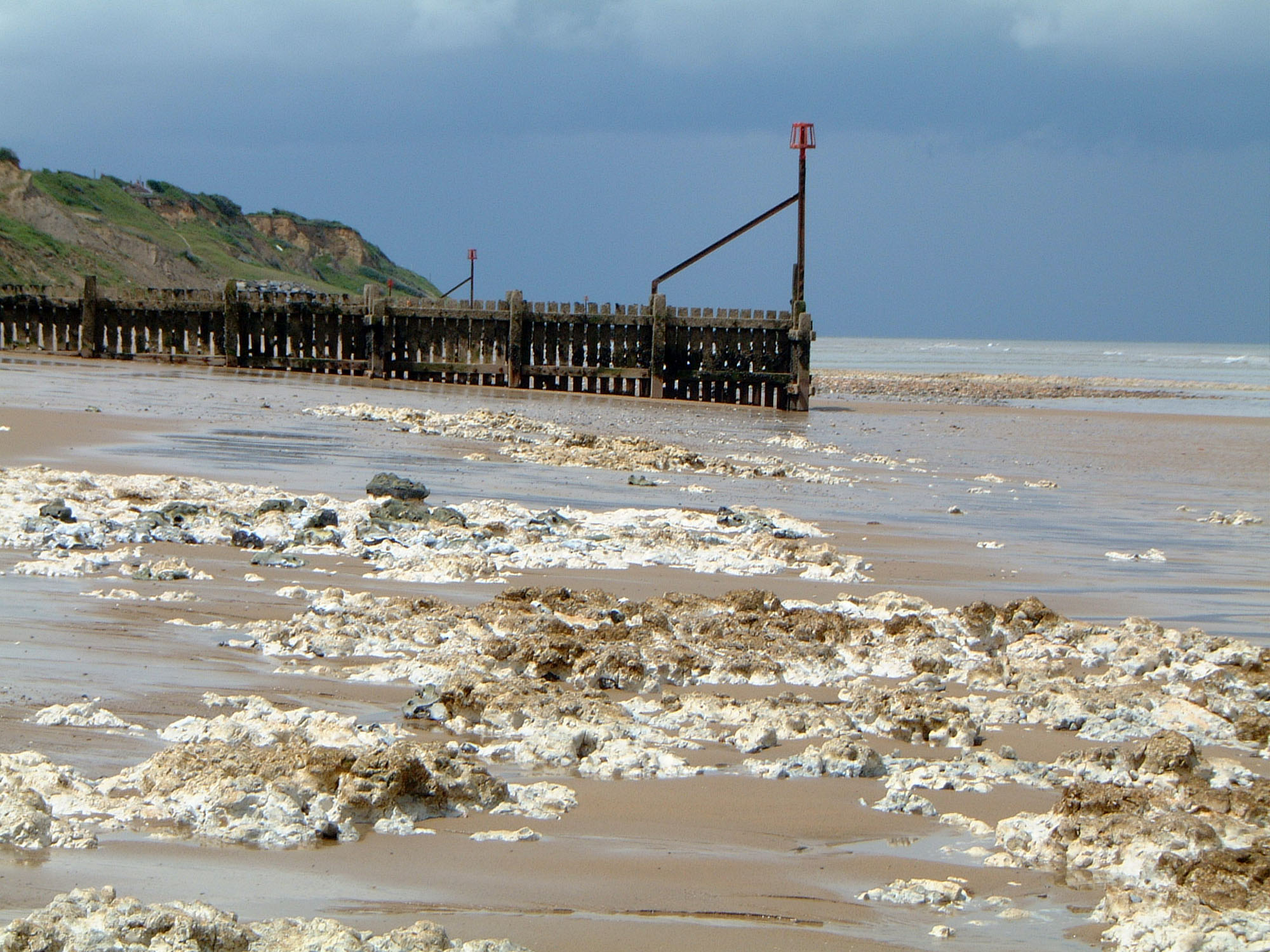 Overstrand is a foreshore collecting location. Chalk is exposed during low tide, especially during scouring conditions or winter/spring months. The chalk is highly fossiliferous, yielding many echinoids, sponges and molluscs

♦ To access the beach of Overstrand, drive through the town and park along the high street. Walk east and a footpath will lead to the beach.
♦ Once on the shore, continue to walk east. It is quite a steep incline down to the beach, but there are alternative routes. The old way down to the shore is now unfortunately blocked due to cliff falls.
♦ Ref: 52.91666°N, 1.34769°E

Echinoids are plentiful at Overstrand and are in a very good condition. Corals, many different types of superb sponges and bivalves can also be found.

During scouring conditions, bones from the Wroxham and Cromer Forest Bed can be also found, Mammoth molars and other remains have been recovered, and are not uncommon. Deer, horse and whales have also been recorded.

You need to visit this location on a falling tide and be around until the tide turns. The best chalk is exposed when the tide is at its lowest, so try to visit during times when tides are at their the lowest, during high pressure (which decreases water height) and during a southwest wind (which also decreases water height). Scouring conditions such as those often seen around the spring months and October are the best times to collect.

You need to search the chalk on the foreshore, but also where pebbles accumulate. In these areas, loose echinoids are common and bones from the Wroxham Crag and Forest Bed can also be found. Bones are also often found around the end of the sea groynes where the bones have been washed down and accumulate in this area.

The cliffs at Overstrand are glacial, and the various colours and textures are superb to see.

When you first go onto the beach from the car park, you will notice a fault in the cliff. A short but high chalk section can also be seen with the Wroxham Crag resting on it. Exposures of Chalk are glacial ‘rafts’, embedded in till, that have been displaced from their natural position just below sea level by the bulldozing power of glaciers in the Anglian ice advance.

The orientation of these blocks differ, however, from those further ‘down ice’ at Sidestrand, in that they are dipping eastwards and southwards and they exhibit normal faulting, as opposed to thrusting. They are half a kilometre ‘up ice’ from the ice margin and represent an extensional deformation regime and have been affected by over-riding ice.The boundary between the Campanian and Maastrichtian stages of the Upper Cretaceous occurs within the exposure, so this is the best place in Norfolk to study it.

In the eastern section, the sediments in the lower cliff belong to the Cromer Forest-bed Formation and are of lower Middle Pleistocene age (Pastonian, Beestonian and Cromerian stages). Over these are glacial sediments – glacio-tectonised tills and glacial lake clays. Due to slumping of the cliff, the section is rarely exposed for long. Tidal laminated sediments of clay, interbedded with sand, shows conspicuous ripplemarks.

Common sense when collecting at all locations should be used and knowledge of tide times is essential. There is no need to climb or search below the cliff face, as fossils can be found along the foreshore washed out from below beach level. The colourful glacial tills at Overstrand are constantly slipping and dangerous to climb.

Most of the fossils can be found on the foreshore and may simply be collected with a keen eye when walking along the foreshore. However, sponges and some other chalk in fossils found in situ may need other tools.