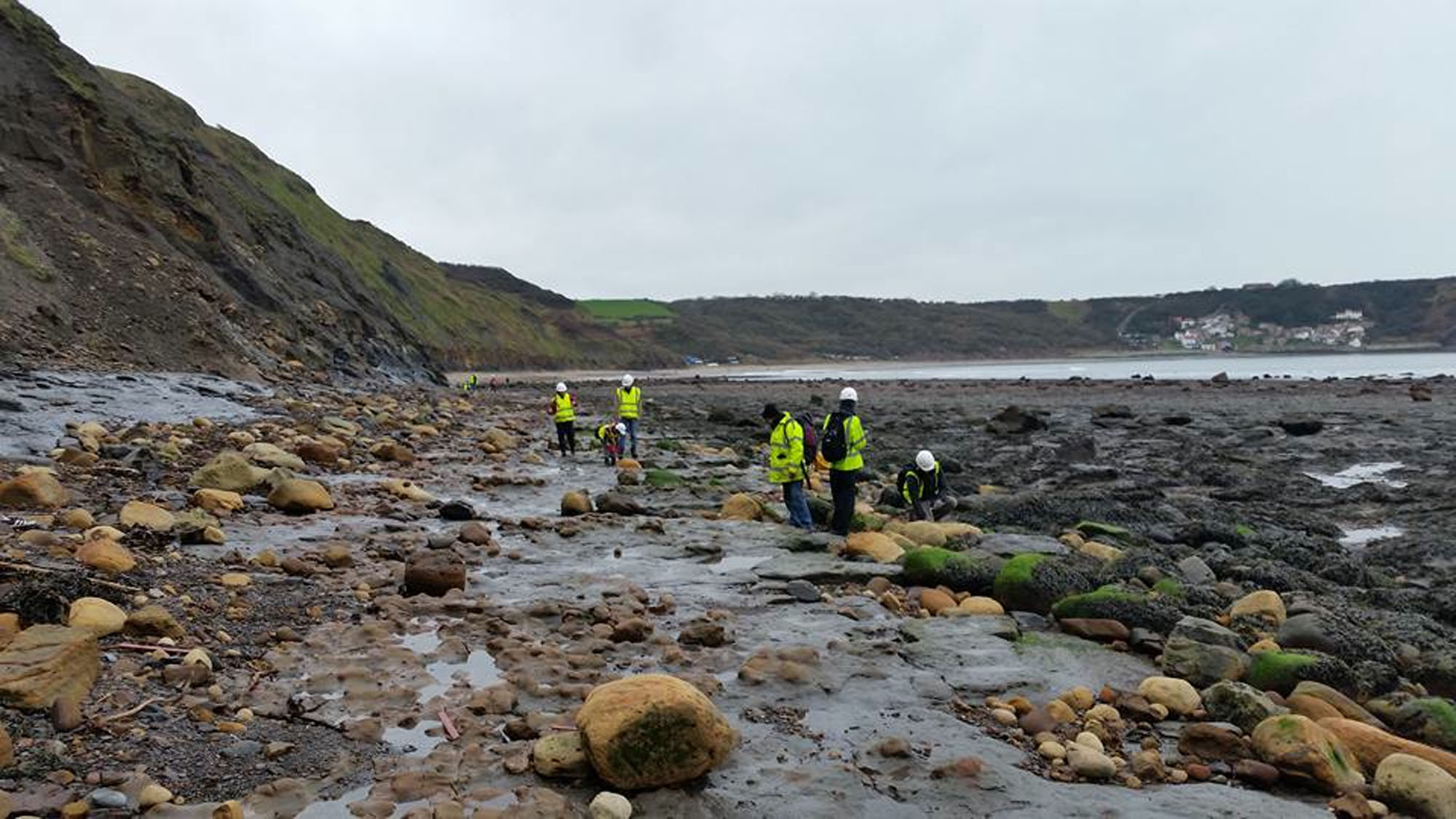 This is another location where you can find ammonites and shells. It can be a very productive location when the conditions are right, yielding a wide range of ammonite species. Most fossils are found on the foreshore.

♦ Head towards Runswick Bay down a very steep road to where there is a large car park from which there is direct access onto the foreshore. From here, head towards the cliffs and search the foreshore on the way.
♦ Ref: 54.532413, -0.74988931

FIND FREQUENCY: ♦♦♦ – Most fossils are found by splitting rocks using a hammer. They can also be found within rocks along the foreshore.
CHILDREN: ♦♦♦♦♦ – This location is recommended for families, as it is easy to access the shore.
ACCESS: ♦♦♦ – There is a short walk to the shore from the car park near the beach.
TYPE: – Most fossils can be found on the foreshore within boulders and rocks, but they are also commonly found in the cliff and in the scree slopes.

The Early to Late Liassic rocks at Runswick Bay, coupled with ease of access, foreshore collecting and a high frequency of ﬁnds, make this a good location for families trying their hand at fossil collection.

Undoubtedly, the coast of North Yorkshire and surrounding the town of Whitby, is a mecca for Jurassic marine fossil collectors. Although any section of coast from Staithes to Ravenscar will oﬀer much the same fauna, especially well-­preserved ammonites at Runswick Bay (including the common Dactylioceras tenuicostatum), about 9 miles from Whitby, is a site well-suited to families.

Access to the beach is easy, with car parking close by. Head east, once on the beach and search among the rocks and beach rubble that occurs all the way to Kettleness. Take care to watch the tide, as there is a danger of being cut oﬀ! The secret is to ﬁnd the hard, ovate or spherical shaped nodules, which contain very well preserved ammonites. These nodules erode because of the sea’s action upon them and the keel of the ammonite within can often be seen.

Sometimes, the nodules can be found in situ protruding from fallen blocks of shale on the beach and can simply be collected from the bedrock.

The nodules need to be ‘cracked’ open, using a geological hammer. This is a relatively easy task and a well-­aimed blow should provide a nice specimen and the negative impression too. Ammonites are the most common fossil found in the nodules here but other fossils can also be found at Runswick Bay, including the large oyster, Gryphaea, various molluscs and belemnites. Remains of Pleistocene mammals, such as mammoth or bison from the North Sea are also often found here, washed up on rough tides.

Common sense when collecting at all locations should be used and knowledge of tide times is essential. This part of the coastline is very dangerous as a result of tidal conditions, so make sure you return before the tide turns. Keep away from the base of the cliffs, as rock falls are very common. Hard hats are recommended.

A Hammer and splitting chisel are recommended at this location. A lump hammer will also come in handy. Suitable footwear should also be worn. Any fossils should be wrapped well and placed carefully into containers.