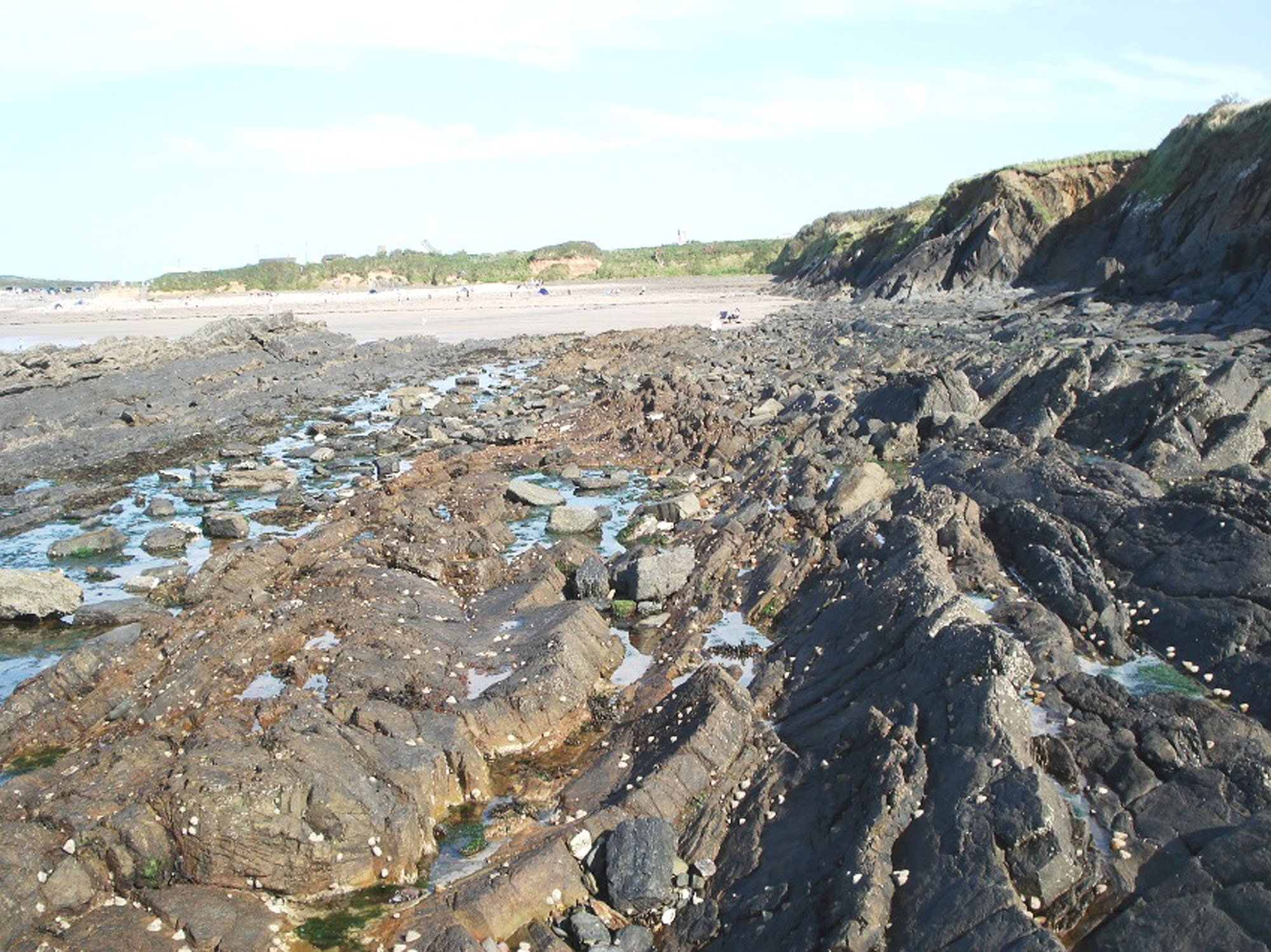 West Angle Bay is eroded out of Carboniferous Limestone, which is packed with crinoids. It is an excellent location to take children to – there is a nice sandy beach, a cafe and public conveniences.

FIND FREQUENCY: ♦♦♦♦♦ – Fossils are extremely abundant here. Most of the exposed rock strata on the north side of the bay are extremely fossiliferous – with crinoid fossils exposed over the majority their surfaces. On the south side of the bay, there are many blocks of shale and limestone that also contain pieces of crinoid in association with other types of fossils.
CHILDREN: ♦♦♦♦♦ – This is an excellent location to visit with children. The beach is popular with holiday makers and there are numerous onsite facilities such as a cafe and toilets.
ACCESS: ♦♦♦♦♦ – There is a free car park with plenty of room for many cars just behind the beach. The beach itself is accessed from the car park and the fossil hunting areas are no more than 200m away.
TYPE: – Fossils are found on the surfaces of large rock outcrops on the north side of the bay and can be observed in situ in the cliffs of the south side. Cobbles and boulders below the cliffs also contain fossils.

Fossils can be found nearly everywhere at this location and crinoids are by far the most common at this location. In fact, whole layers of rock here are packed with them.

It is probably advisable to investigate the north side of the bay first to observe the in situ fossils, which cover much of the rock outcrops here, but must not be collected or damaged. The rock outcrops on this side are composed largely of crinoidal limestone and plenty of impressive fossils can be observed on their surfaces.

When you have looked over the north side, head across the bay and look among the fallen boulders and cobbles for fossils. The rocks here alternate between crinoidal limestone and shales. Where a shale layer has been worn away from the limestone, many fossils can be seen standing out in relief from the limestone layer. Smaller pieces of this can be collected but leave larger rocks and do not damage them. Likewise, the cliff should not be collected from. A few strata within the cliffs on the south side can be seen to be packed with fossils. These are found about half way along the cliff section.

On the south side of the bay, blocks of crinoidal limestone can be found. These sometimes have very intricate and well-preserved fossils exposed on their surfaces. Along with the fossil crinoids, bryozoa, corals and brachiopods can be found.

The geology at West Angle Bay consists of interbedded limestones and mudstones from the rocks from the Dinantian (Lower Carboniferous) Avon Group (formerly known as Lower Limestone Shale) from the Tournaisian Stage, Courceyan Substage of 359-352 Mya and limestone from Black Rock Subgroup and Gully Oolite Formation (undifferentiated), of 359-339 Mya which have been folded into a syncline with faulting and other minor folds exposed in a wave cut platform on the beach.

This is a fairly safe location. The bay is wide and there is no chance of getting cut off by the tide. Common sense should suffice at West Angle Bay.