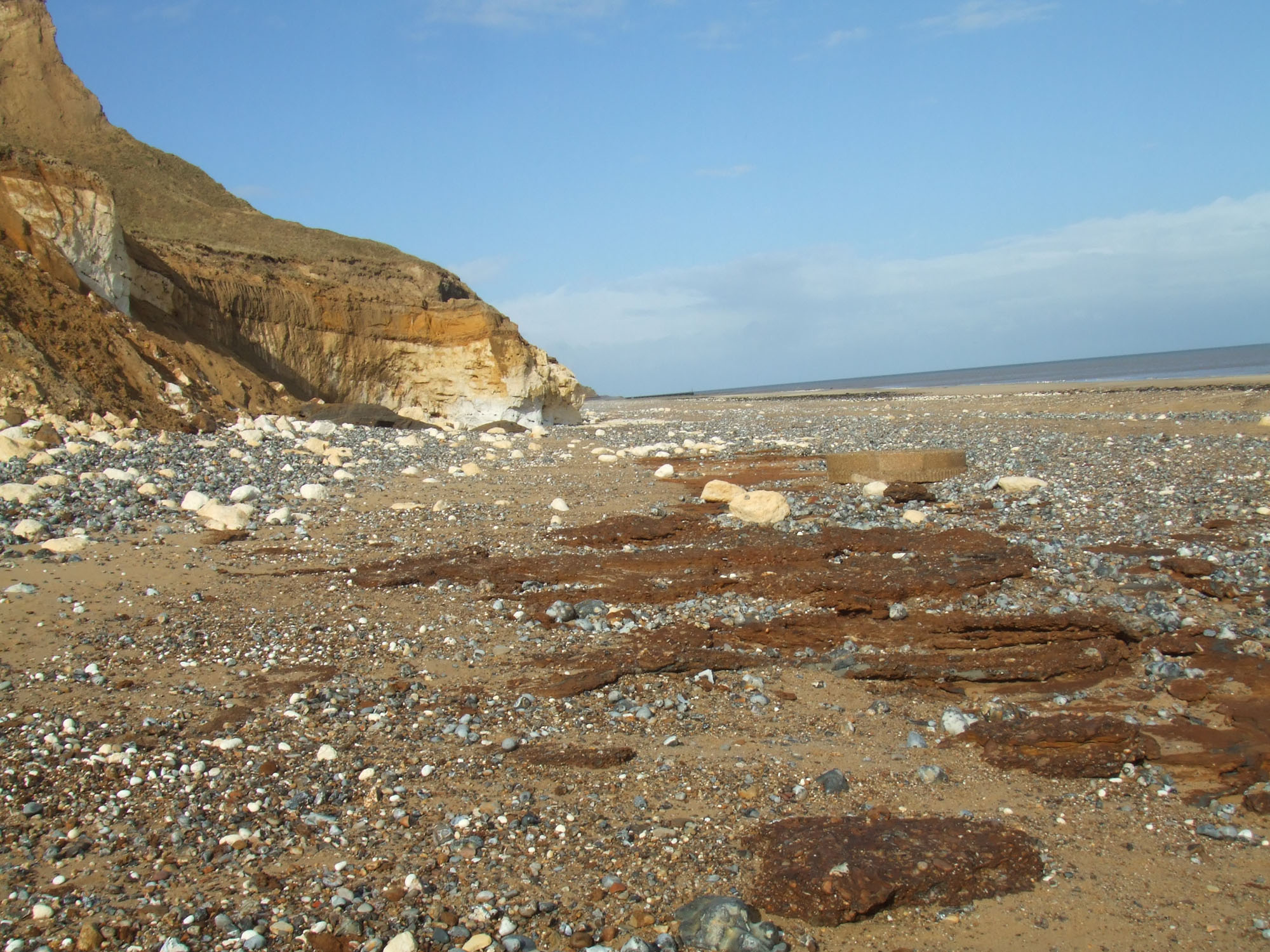 East Runton is the best location for mammal remains from the Pastonian Stage interglacial. It also is one of the only locations where you can see younger Pleistocene beds below huge chalk cliffs. The chalk was transported here during the ice age and is spectacular to see.

♦ From Cromer, follow the A149 to Sheringham and you will come to the village of East Runton, just past the caravan sites. The village is in a dip, at the bottom of which you will see a signpost to the right to the beach It also has a parking sign.
♦ The car park is on the right. You will need to pay, but it is not too expensive. There are toilets nearby. From here, a slip road to the beach allows easy access (which is similar to West Runton).
♦  Once on the shore, walk to the west (left) and you will see the chalk formations.
♦ Ref: 52.93760°N, 1.27383°E

FIND FREQUENCY: ♦♦♦♦♦ – Mammal bones at East Runton are very common, although most are fragmentary. The chalk is also packed with belemnites and other fossils.
CHILDREN: ♦♦♦♦ – Although suitable for children, East Runton has some tall cliffs and a rocky foreshore, so care should be taken. The rocks on the foreshore are mostly flints, which can be sharp and dangerous.
ACCESS: ♦♦♦ – This location is quick and east to access. There is parking with toilets nearby, with shops in the town just a short walk away.
TYPE: – Most fossils are found in the foreshore gravel exposures and clays, and in the areas of rock and shingle. East Runton has cliffs, but you are more likely to find fossils on the foreshore.

The chalk at East Runton mainly yields belemnites. These are very common and can be found both in the cliff and foreshore exposures. Echinoids and corals can also be found on the foreshore, but these are less common.

The gravel beds contain an extensive vertebrate fauna, which includes carnivores, extinct horses, elephants and several species of ’comb-antlered’ deer. In fact, this is considered the best available locality for fossil vertebrates of this age.

There are not many locations in the UK, where you can find, huge chalk cliffs sitting on top of Pleistocene deposits. East Runton is a location, where the power of ice can be seen, as it was glaciers that were responsible for these spectacular cliffs.

At the top of the cliffs are the glacial sands and gravels. Here these can be thin beds and have been almost totally removed by ice movement. However, in other areas, they can be many metres thick. The Wroxham Crag forms at the base of these deposits, although it is not always continuous and varies in thickness. Some pockets of this bed contain shells beds similar to Weybourne.

Below this is the Beeston Chalk. This is not continuous, because rafts of ice transported the chalk from elsewhere and created a highly deformed ‘contorted drift’. In some areas, the chalk is missing, while in others, it forms the bulk of the cliffs.

The most astonishing succession consists of the formations below the chalk. Here, the geologically older chalk sits on the younger Pastonian clay conglomerate and marine shell beds. These can be seen as light blue clay exposed on the foreshore and hard gravel beds compacted together with stones, gravel and small boulders. In other areas, clay, gravels and silts are mixed together in a patchy bed.

The Beeston Chalk can also be seen on the foreshore, which is the actual original bedrock and has not been transported like that in the cliff.

Common sense when collecting at all locations should be used and knowledge of tide times is essential. At East Runton, the sea can sometime reach the base of the cliff and you can become cut off. The foreshore can also be slippery and rocky.

Most of the fossils at East Runton are found by searching on the foreshore. However, the gravel beds can be hard and so a knife or pick will come in very handy. You may also want a hammer and eye protection for the chalk.