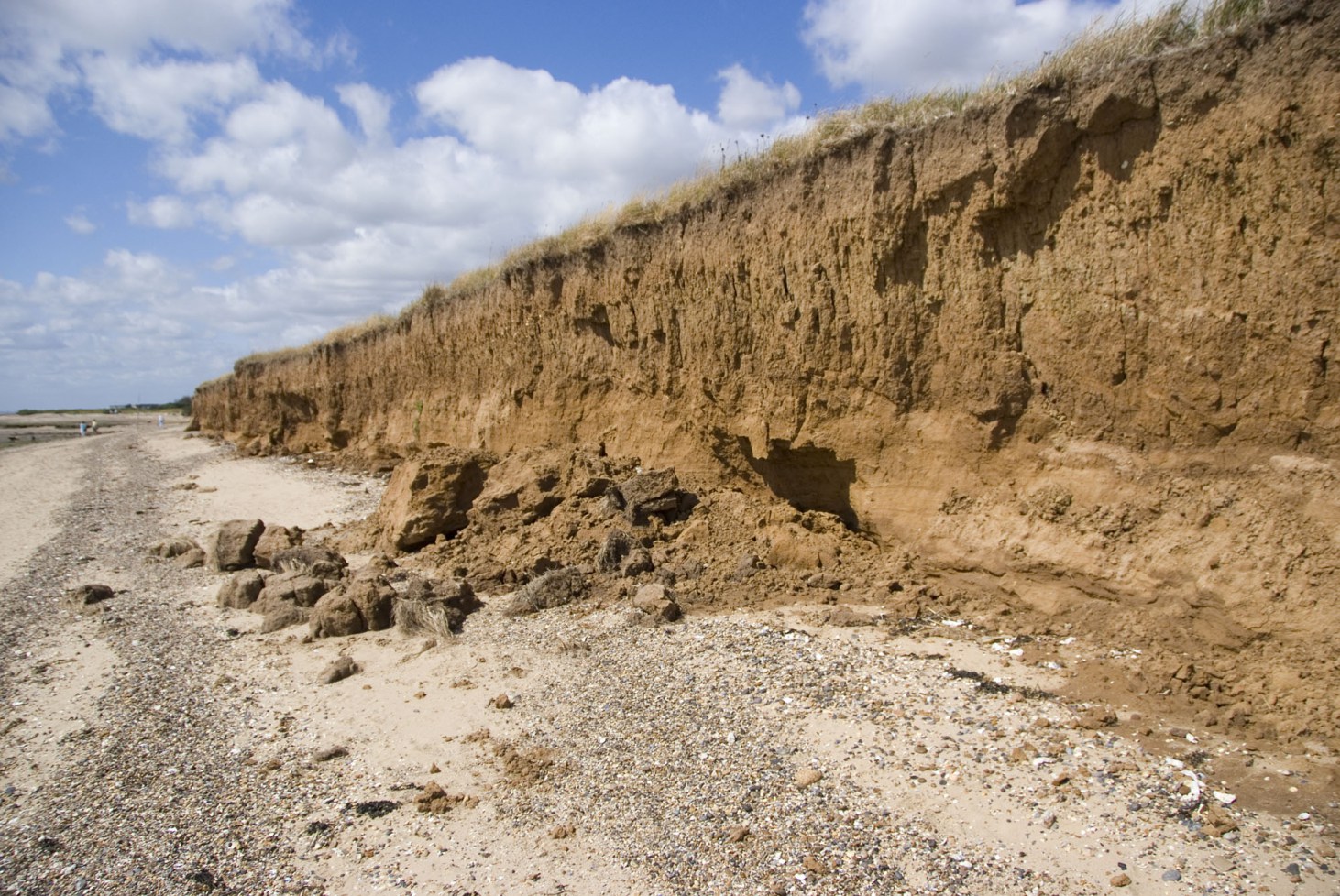 East Mersea can be very popular in the summer, as it is a beautiful area, not far from Colchester. The foreshore is made up of London Clay, with a few sharks’ teeth to be found. This site is also well documented for OIS5 and OIS6 Pleistocene deposits, rich in (among other things) the teeth from small mammals and the shells of molluscs.

♦ Mersea Island is not that well signposted and the only practical way of getting there is through the middle of Colchester. Therefore maps and a GPS device are ideal for getting to and around the island. Once on the island, there is only two ways to go – west to the main town or east to the more scenic areas.
♦ Head east, following the road until you reach a bend with Cudmore Grove Country Park signposted ahead. Take this road and it will lead to a large car park. From here, walk to the foreshore and head southwest (to the right).
♦ 51.79041°N, 0.99496°E

FIND FREQUENCY: ♦♦♦♦ – Fossils from the London Clay are not that common, although collecting during spring and autumn scouring is quite productive. However, this location is well documented for small mammals from the Pleistocene deposits, especially if you wet sieve samples onsite or at home.
CHILDREN: ♦♦♦♦ – East Mersea is suitable for children. There is plenty of grass to play on, a picnic area, toilets and a sandy area on the beach. However, keep away from the mud flats.
ACCESS:♦♦♦ – Once on the island, there is good access to the fossil sites, with toilets, a cafe and a picnic area at the car park. Getting to the island through Colchester is the only challenge.
TYPE: – Most fossils are found on the foreshore by searching in the areas of shingle or in the London Clay mud flats. Some of these areas can be dangerous, so stick to the harder clay areas. Samples of sediments can be taken from the foreshore Pleistocene channels for sieving at home, which are rich in small mammals.

The vast majority of people visiting this site will be interested in the London Clay exposures at the western end of the cliff. As with all London Clay sites, the most common finds are sharks’ teeth, although the site is not particularly good in this respect.
However, East Mersea is also well documented for its Pleistocene deposits, which are rich in small mammals. These deposits form a channel near to Cudmore Grove Country Park on the foreshore and, if you sieve samples, you can find several rodent species. These are from an interglacial period during the Pleistocene and dating from OIS9. Freshwater molluscs are also common from these deposits. Further west, another deposit dating from OIS5 contains hippopotamus remains, but this is below the level of the beach. Keep an eye out for Bronze Age flint artefacts, which can also be found at East Mersea.

The foreshore at East Mersea has extensive deposits of London Clay (Eocene ~50 mya), forming the ‘Mersea Flats’, which are a haven for birds and other wildlife.

The cliffs at Cudmore Grove Country Park provide exposures of gravels laid down by the Thames-Medway River during a glacial period 300,000 years ago. Sediments at beach level sometimes yield fossils, including fossil wood and mammal bones, that indicate that they were deposited during an interglacial period. Also, exposed on the foreshore are deposits from a more recent interglacial period, the Ipswichian interglacial (120,000 years old), and known as the ‘hippo site’ due to the presence of hippopotamus bones.

Erosion by the sea in recent decades has created excellent coastal exposures in the 5 to 6 metre high cliffs, which can be seen as layers of sand and gravel, laid down by the combined Thames-Medway River 300,000 years ago.

However, a large channel-like depression in the London Clay, at the base of the cliffs and exposed on the foreshore, is a former river channel associated with the Thames-Medway River and contains layers of gravel, silt and clay with numerous shells and sometimes bone. Bones of beaver, macaque monkey, wolf and bear and a large number of small animals such as rodents, bats, birds, frogs, toads and fish, provide us with a comprehensive picture of the wildlife in eastern Essex 300,000 years ago.

Common sense when collecting at all locations should be used and prior knowledge of tide times is essential. At East Mersea, the main danger is the mud flats. Take extra care when looking for fossils on the foreshore, as some areas are extremely muddy and it is easy to become stuck. Do not venture too far out. Generally, you can see the hard, safe areas, as the clay is well exposed, but there are sometimes areas of soft mud.

Most fossils are found simply by walking along the foreshore. Any larger bones you find may need a small spade to dig them out of the mud.