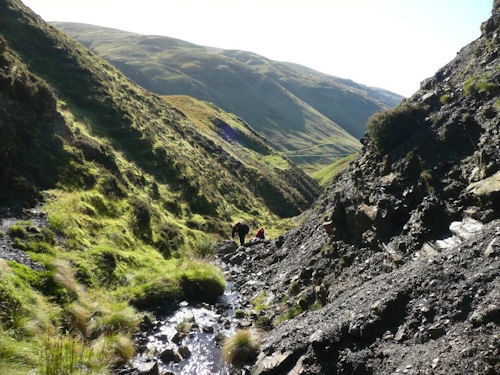 Dob’s Linn is a famous location for graptolites and, indeed, is one of the best, and you can collect many different species form the shale. However, the location can be hard to find, but it is well worth the trip. Be sure you bring paper to wrap up your specimens.

♦ Dob’s Linn is near the A708 between Moffat and Selkirk at Birkhill. Fossils are found in the gorge, which has cut through black graptolitic shales.
♦ Along the A708, you will pass the Grey Mare’s trail. Dob’s Linn is just past this, and from Moffat, it is on the left hand side of the road.
♦ It takes about 30 minutes to walk to the fossil site from the car park entrance. Follow the burn and keep to the right hand side of the stream.
♦ Ref: NT 19659 15827

FIND FREQUENCY: ♦♦♦♦♦ – Dob’s Linn is famous for graptolites and is one of the best sites where you can collect them. Although graptolites are the only find you will probably make here, there are many different species. The specimens are also superbly preserved, unlike many similar locations.
CHILDREN: ♦♦ – We do not recommend this site for children, because of the long walk. There are also no facilities, such as toilets, as this site is in the countryside.
ACCESS: ♦♦ – Dob’s Linn appears to be in the middle of nowhere and can be hard to find. We suggest you purchase an OS 1:25,000, map which will have the location marked. It is about a half an hour’s walk to this site, so take plenty of food and drink.
TYPE: – Fossils are found in the gorge that has cut through fossil-rich shales and can be collected from the scree or fallen rocks. Do not hammer for bedrock, as this site is a SSSI and is of great geological importance.

Dob’s Linn is a famous site for graptolites. There are a variety of different species to be found here, including Monograptus, Dicranograptus, Dicellograpus, Rastrites, Cimacograpus and Pentalograpus. Search the scree slopes and fallen shale blocks for fossils. The rich graptolitic shale is repeated many times in a series of folds, so you do not need to look hard to find the fossil-rich shale.

The graptolites are found within Ordovician and Silurian black shales, with Dob’s Linn being on the boundary of these two geological periods.

The shales here are probably extremely thick (thousands of metres). Indeed, it was previously believed that there were ten zones of graptolites. However, further research has concluded that actually it is one bed folded within the greywackes, which makes this location so productive. You will also find volcanic ash in pockets and layers.
This site is so important that the world strato-type for the Silurian system is at this locality.

You should use common sense at all locations. Some of the faces can be slippery after rain and are fairly steep. Make sure you take food, water and suitable clothing, as it is quite a distance from the road.

You will need a chisel pick to break up the loose shale at this location and lots of paper to wrap your fossils. The fossils are in shale, so need some protection. A knife may also be useful and walking boots and suitable clothing are essential.