Thorness Bay sees a continuation of the Hamstead Beds, which can also be seen at Hamstead Bay and Yarmouth, and the start of the famous Insect Beds of the Bembridge Marls seen at Gurnard Bay. However, the beds are much thinner and less productive.

♦ Gurnard Bay is west of Cowes. Follow the coastal road (Marsh Road) from Cowes to Gurnard, where you will find limited parking at the end of the road.
♦  Follow the Coastal footpath at Gurnard Bay, which will allow access to the beach.
♦  From here, walk southwest along the beach. We recommend that you do both this location and Gurnard Bay together. This must be done on a falling tide.
♦  Once you pass Gurnard Point, you will be at Thorness Bay.
♦ Ref: 50.74740°N, 1.34582°W

FIND FREQUENCY: ♦♦♦ – The centre of the bay consists of recent Palaeogene deposits, with the only fossiliferous exposures to the north and south of the bay. These exposures tend to be badly slipped and somewhat overgrown. The formation is also much thinner than those at Hamstead Bay and Yarmouth, meaning that fossils tend to be much less common.
CHILDREN: ♦♦♦ – This location can sometimes contain some mudflats, which can be dangerous. Therefore, we suggest that only older children (supervised by an adult) visit this location.
ACCESS: ♦♦♦ – Thorness Bay is fairly easy to access, but can be a fair walk. You have to park at Gurnard Bay and walk south, as there is no direct access to Thorness Bay, because of the private roads with no unauthorised access.
TYPE: – Fossils are mostly found along the foreshore. You can also take samples from the cliff, where microfossils can be found. At the base of the cliff, the famous insect bed can be seen at the north end of the bay, although this can often be obscured by sand.

The area between Gurnard Bay and Thorness Bay is a classic location, famous for the Bembridge Insect Bed. This bed seems to have become less productive, but blocks can still be found in favourable conditions.

The centre of Thorness Bay is unfossiliferous, since these are covered by recent Palaeogene deposits. However, fossil remains of crocodiles and turtles can be found along the foreshore throughout the bay, washed from the Hamstead Beds at either end of the bay and from the area between Hamstead Bay and Yarmouth. These can be easily picked up along the foreshore, although they are much less common than from the main Hamstead Bay to Yarmouth sequence.

At the southern and northern ends of the bay, a low cliff will provide some exposures (although mostly slipped) of the Hamstead Beds. The Bembridge Marls also yields crocodile and turtle remains on the foreshore. A complete turtle was found a few years ago. Samples can be taken of these marls for sieving at home.

During scouring conditions and below beach level, the Bembridge Insect Bed can be seen. This is a bed with grey to blue-green laminated muds, with a distinctive buff and blue grained limestone and marl. This bed used to be highly productive, but has become less productive in recent years. Over 200 insect species have been recorded, together with some delicate fossils, such as bird feathers. These fossils are found within a limestone bed. 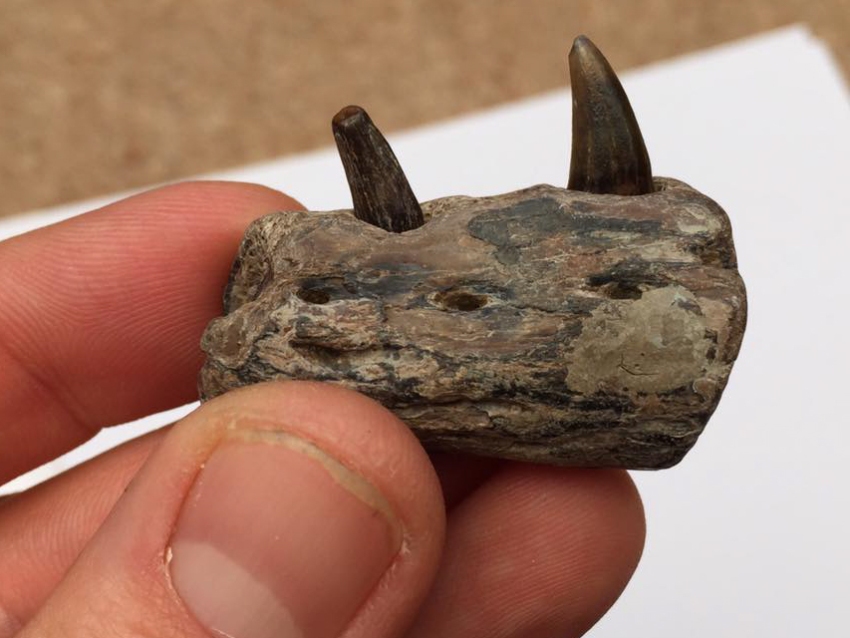 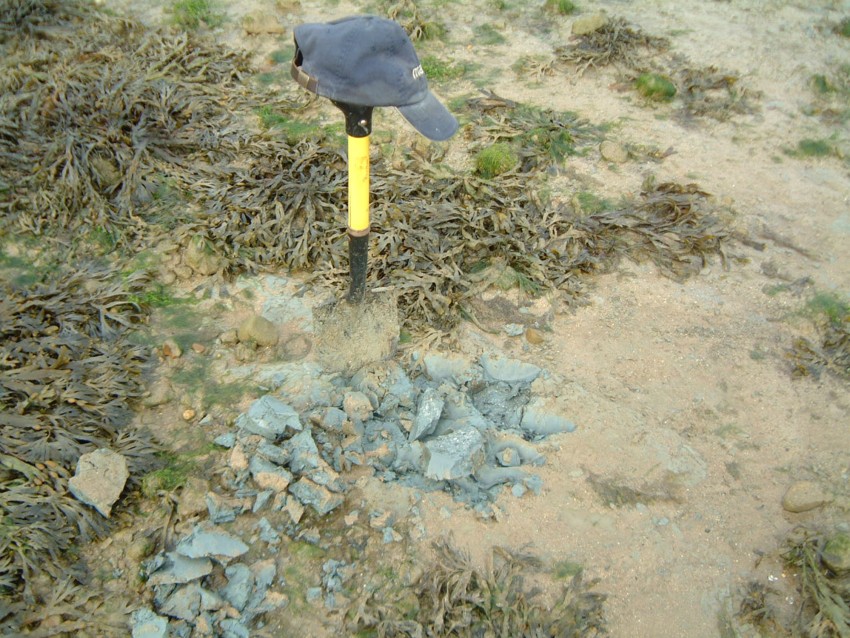 Most fossils can be easily picked up without the need for any tools. You may need a pick, a hammer and safety glasses for any blocks of the insect bed you find and, if taking samples, a trowel and sample bags are needed.

Common sense when collecting at all locations should be used and knowledge of tide times is essential. Care should be taken of tides at all locations. The sea does reach the base of the cliff, so ensure you return before the tide turns. Also, there are often some very deep mud flats at the lower part of the foreshore, which must be avoided.