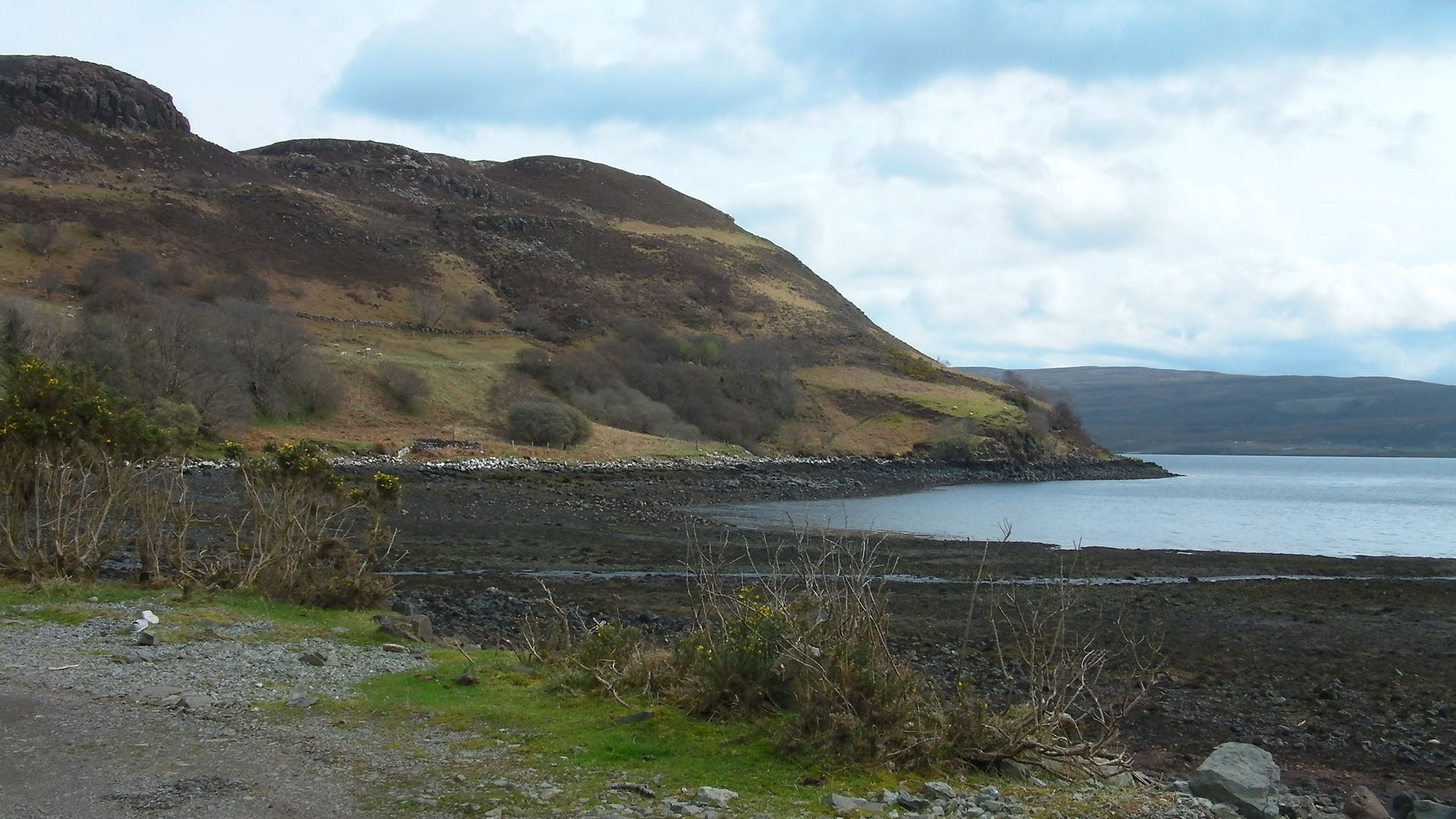 Camustianavaig is not for the faint-hearted, with a long hard walk and a very rugged terrain. However, for the enthusiastic serious collector, it has a few amazing fossils. And the stunning scenery and absolute solitude in this very remote location makes it a wonderful place to visit.

♦ Take the A87 to Portree or, if coming from Portree, take the same A87 towards Broadford.
♦ Then take the B883 to Braes, Penifiler, and Camustianavaig. However, do not take the left fork for Penifiler, but rather, head for Braes.
♦ Take the tight left hand junction at the bus shelter and head for Camustianavaig, taking the right hand side of the forked road a few hundred metres later. Park at the picnic benches at the bay.
♦ Cross the burn on the foreshore and head over to the high tide line. Then follow this until you see a track. Keep to this, up a small incline and round the headland.
♦ Ref: 57.37248°N, 6.14573°W

FIND FREQUENCY: ♦♦♦♦ – Once you reach a grassy hill, fossils are fairly frequent. Look for the Toarcian, multi-ammonite boulders. The rocks have the Toarcian rock sandwiched between layers like a burger in a bun. The Upper Pleinsbachian rocks contain large scallops and many other bivalves. Sandstone blocks also contain plant fragments.
CHILDREN: ♦ – This is not a family location. In fact, unless you are fit and willing, this is certainly not for the faint-hearted. There are also no toilets or services at Camustianavaig and you must take your own food and drink.
ACCESS: ♦♦ – Access is moderately good and, although you can park for free at the picnic benches in Tianavaig Bay, no overnight parking is allowed. Note that your presence may be monitored due to the proximity to eagles’ nests. Be prepared to walk along a narrow sheep path that can be several metres up from the shore. This is safe as long as you take your time. It should take approximately 40 minutes until you reach a grassy hill, where the fossils can be found.
TYPE: – Fossils are found in loose boulders on the shore, and can often be well exposed due to the erosion caused by strong waves and the motion of the sea. There is not a lot to be found in the cliffs and these should be avoided at all times, because they are very dangerous and have already claimed lives. Try to keep away from the eagles’ nests.

There are access restrictions from May to August. In addition, do not hammer the bedrock. It is also important that you do not walk too far along the shore during the white tailed sea eagle’s breeding season. It is much frowned upon as it will disturb these important birds (May to August).

Camustianavaig is a very remote fossil site, with a long hard walk in and out, but has a serene beauty and solitude rarely found on an ever-increasingly populated Skye. Raasay dominates the western horizon, while the rugged cliffs of Benn Tianavaig loom to the east. Seals and otters are commonly seen, as can the white tailed sea eagles. Take a camera.
Once you have reached a grassy hill, fossils begin to appear regularly. Keep a close eye in and around the smaller boulders for fossiliferous blocks. The size of some of the larger boulders has to be seen to be believed. Be careful if you are hopping over and between these. Look for the thin-banded Toarcian stage, multi-ammonite blocks and boulders. These can be split with a cold chisel or something similar. There are lots of loose rocks with fossils showing, so there is no need to hammer into bedrock.

The rocks here are Jurassic in age and are 176 to 183 million years old. As well as Portree Shale Formation mudstone sediments from the late Pleinsbachian-early Toarcian stage of the early Middle Lias zones, this is where the only exposure of Upper Lias Toarcian stage sediment on Skye is found, but it is only a few centimetres thick. The other Middle Lias fossils include Ludwigia murchisonae and Graphoceras sp.

Below this, the Scalpay Sandstone Formation rocks are from the Pliensbachian stage of the Jurassic from 176 to 190 million years ago.

Pleinsbachian fossils include belemnites, brachiopods and an array of bivalves like Psuedopecten equivalis. Toarcian fossils include ammonites like Amaltheus margiratus, Catacoeloceras sp. Dactylioceras commune and Harpoceras sp., as well as smaller bivalves and the occasional nautiloid.

Northwards, along the coast, the Bearreraig Sandstone Formation (Toarcian – Bajocian) can also be found and contains some wood and other plant fragments, including fronds.

The location is best visited on a falling tide, as some of the large obstacles can be avoided at this time. Be careful walking below the mid-tide mark, as the weed-covered rocks can be very slippery. Take your time at all times. A personal guide by a local geologist, who is very familiar with the site, can be arranged. Contact Anthony Rybak on 01471822640 or his mobile (07931512972), or by e-mail at: anthonyrybak321@btinternet.com.

Mobile phones can get a signal along most of the walk. Take an 8kg sledge hammer at the very least, a cold chisel and safety goggles. Do not be tempted to take a large boulder back, as the walk home is long and tiring. Take a camera for the views.

Scotland’s fossil resource is at risk of abuse and damage, and so we must all safeguard and managed fossil collecting to ensure its survival for future generations. For this reason it is VITAL you read and adhere to the Scottish Fossil Code for ALL sites in Scotland.
It is important to follow our ‘Code of Conduct’ when collecting fossils or visiting any site. Please also read our ‘Terms and Conditions‘