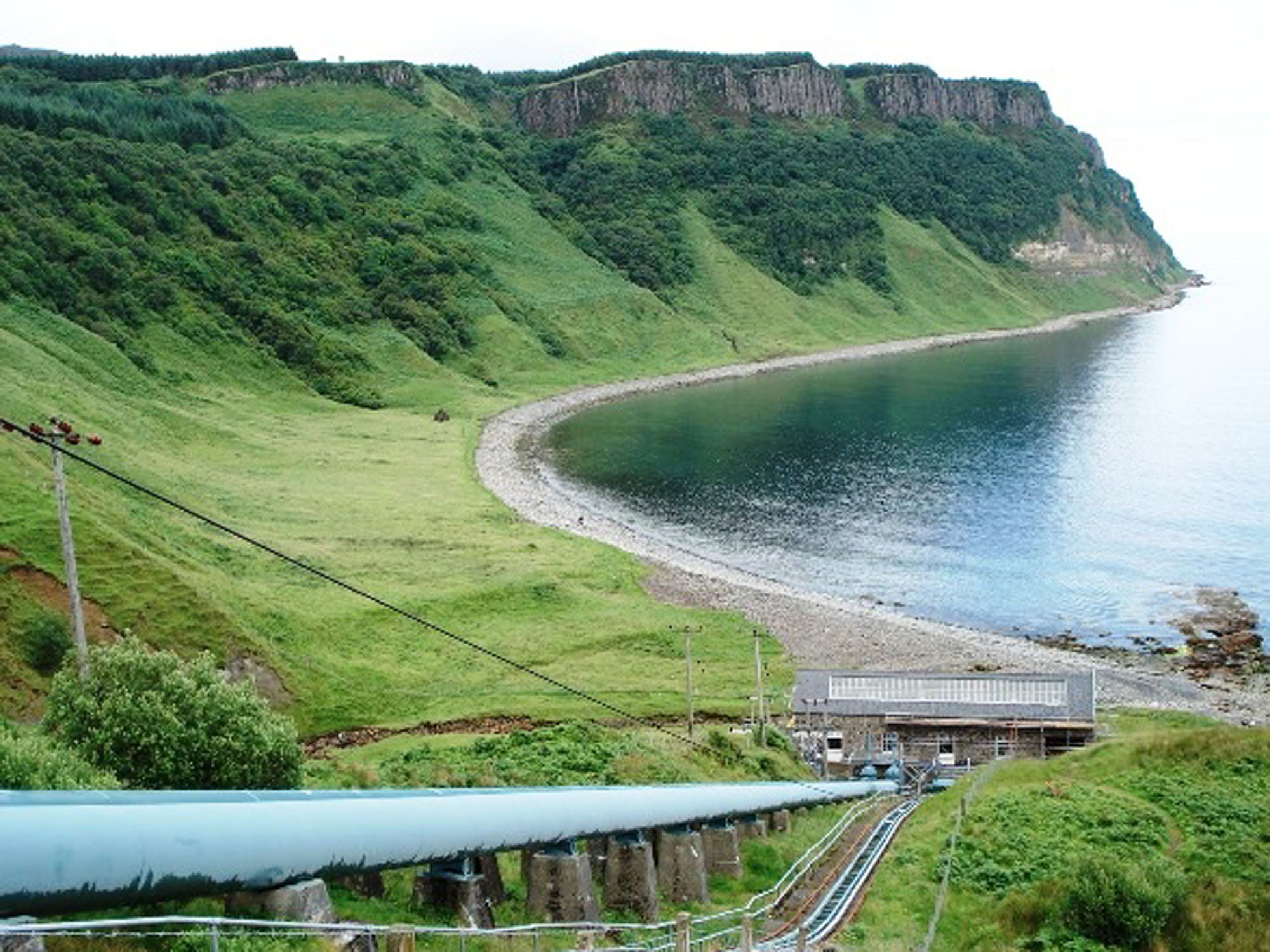 Skye features a complete sequence of 400m of the Jurassic history. The entire coast from Portree to Staffin consists of fossiliferous Jurassic rocks. This guide features Bearreraig Bay fossils and some local information.

♦ There is a tarmaced road to the power station, which allows access to the bay and car park.
♦ The A855 goes along the side of the loch which provides water to the power station. Just before you ascend a hill, after passing the loch on your right, take a right turn into a small road and follow this.
♦ This road passes over the dam and the ‘Old man of Storr’ can be seen directly behind you.
♦ There is only a guiderail at the top section of the path, which can be very slippery. Do not use the grass beside the path, as this can be hazardous.
♦ Ref: 57.49953°N, 6.14887°W

FIND FREQUENCY: ♦♦♦♦♦ – Fossils are common here, with ammonites, belemnites and plant remains being seen everywhere. Commercial collecting is not common and the site remains fairly unknown. And, despite the fact that fossil collectors obviously come here, there is plenty to be found.
CHILDREN: ♦♦♦ – This site is not suitable for very young children. The descent and ascent of the cliffs is difficult and steep, and one wrong move could result in a serious or fatal fall. That said, the path is clear, not slippery and, in places, has a guiderail; and, the cliffs consist of soft grass. There is only a guiderail at the top section of the path, where it can be very slippery; and avoiding this section by using the grass can be just as hazardous.
ACCESS: ♦♦♦ – Local toilets are a long drive away at Portree or Staffin (about 8km each). Similarly, food and drink are best found in the local towns. The power station at Bearreraig Bay has a cliff railway. At the top of this, there is a house and station house, where there is a car park and the start of the path down to the beach.
TYPE: – Fossils can be found on the foreshore in rocks, pebbles and boulders.

This is an SSSI, so hammering the bedrock is strictly prohibited. Fossils can only be collected if found in pebbles on the beach. Failure to obey these rules can result in prosecution.

Fossils can be found all along the coast here. However, most are of limited quality and all are in extremely hard rock and often huge boulders. These will often require a lot of preparation. The most famous ammonite from this location is the highly collectable Ludwigia. This is best found in a layer of rock only exposed to the south of the bay. Note that this can ONLY be accessed on a low tide, and can often be covered by sand. However, there are many other species of ammonites and fossils to be found at this location.

To get to the best beds, after walking down the cliffs to the bay, take a right turn and follow the beach around the low cliff. You will be walking on rock here. Take care here, as cliff falls occur frequently along this coastline.

The most common fossil at Bearreraig is the belemnite. In the local fossil museum, there are some stunning huge examples. In addition, ammonites and bivalves can be found. The most common and best preserved ammonite is Ludwigia and there is an entire layer about 30cm thick containing a mass grave of them.

Parts of the bay can be quite dangerous if you misjudge tide times. Often, just a few hours after high tide, you can get you cut off, so always collect during a falling tide. 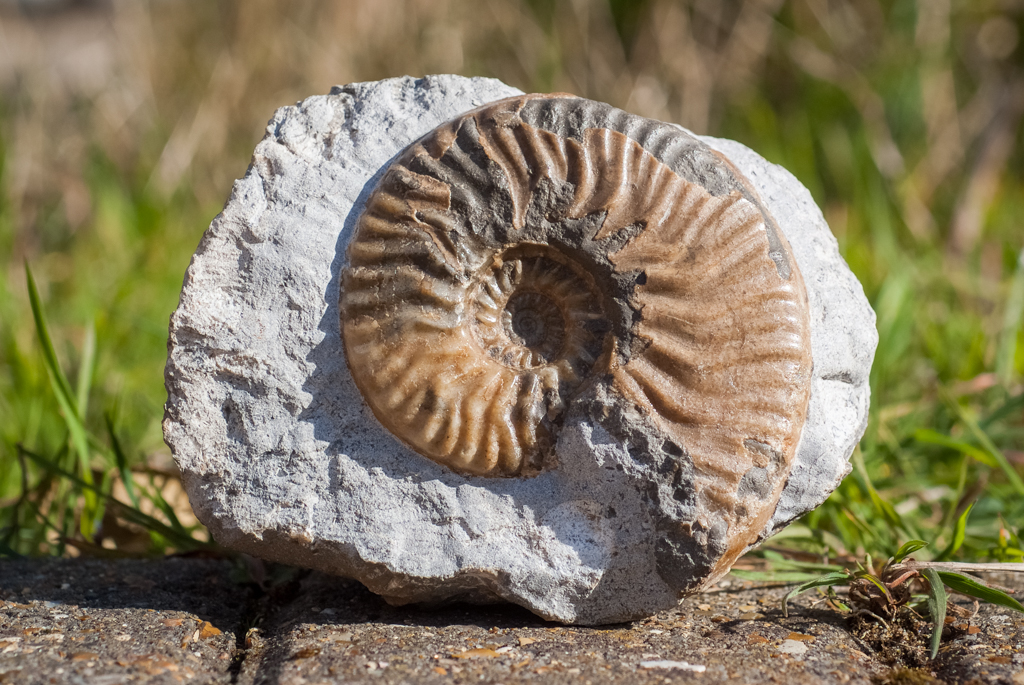 The rocks here are mostly from the Jurassic -aged Bearreraig Sandstone Formation of 168 to 183 mya. They comprise mudstones, sandstones and limestone. The formation is dominated by fossiliferous calcareous sandstone with subordinate limestone and fissile mudstone. Rocks are Toarcian to Bajocian.

The contact with the overlying Garantiana Mudstone Member is sharply marked by a fossiliferous granule to small pebble conglomerate.

The flat layer of vertical columns of rock (similar to the Giant’s Causeway of Ireland) can be seen above this Jurassic layer all along the coast. This layer is known as ‘kilt rock’, because it allegedly resembles a kilt. It is an intrusion of lava that happened when Skye was volcanically active during the Tertiary.

South Bearreraig also has fossils from the same zones and stages as the north side. However, this location is tidal due to the ‘bad step’. The prevailing winds tend to roll loose boulders along this shoreline and, as a result, a raised beach opposite Holm Island, comprising Scalby Sandstone Formation of 176 to 190 mya, can yield good fossils. The rocks are Bathonian from the Ravenscar Group.

Common sense when collecting at all locations should be used and prior knowledge of tide times is essential. If you go to the south side of the bay, watch out for the slippery rocks around the bad step. Take your time until you reach the dry rocks. There are signs that enable you to know when you need to return to the bad step before the tide makes it impassable. Do not climb the gullies, as they are very unstable.

This is an SSSI, so hammering and collecting in situ fossils are strictly prohibited. Fossils can only be collected if found in pebbles or loose rocks on the beach. Failure to follow these rules can result in prosecution.