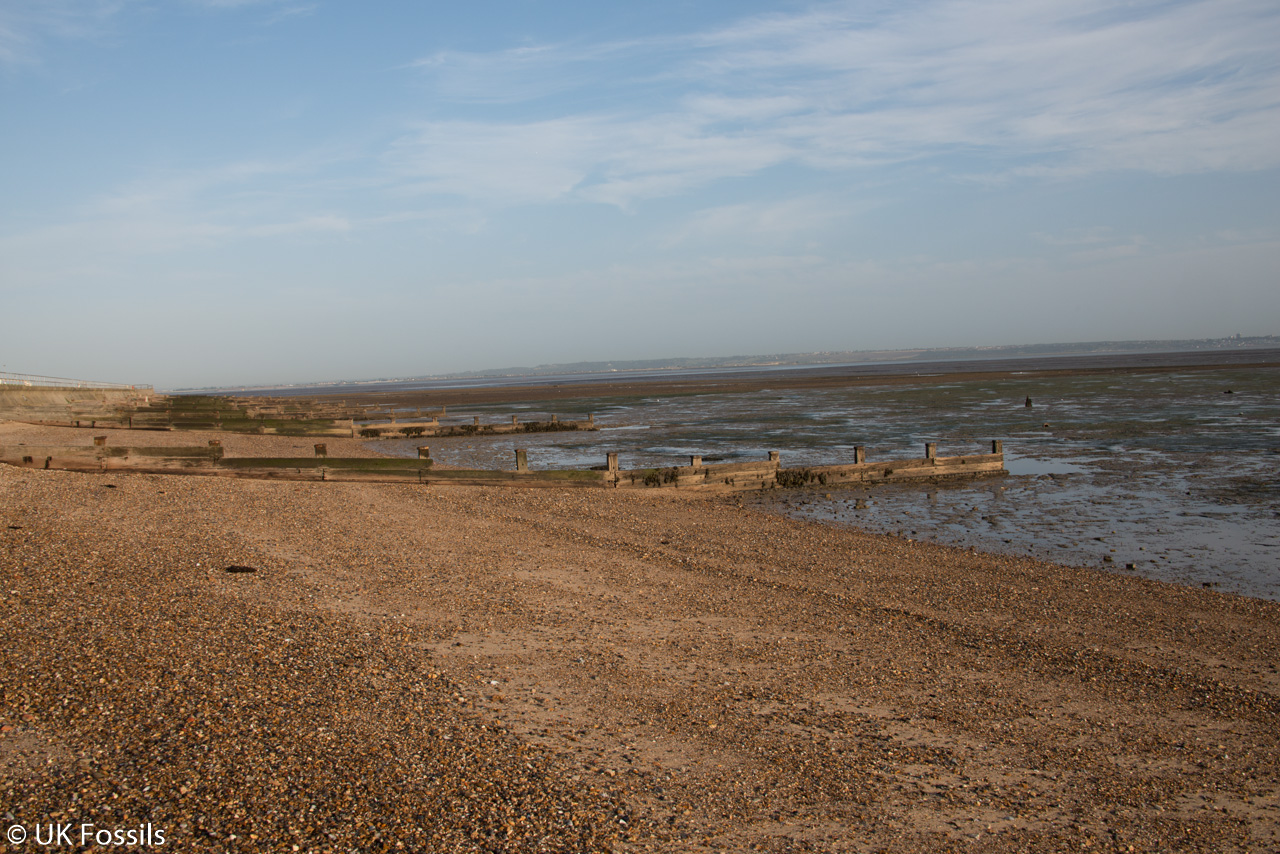 Allhallows-on-Sea is a London Clay foreshore location, northwest of the Isle of Sheppey on the south side of the River Thames. The actual site runs along the beach next to a large holiday park, which is protected by a 1.8km-long seawall. Success at this location is often subject to beach conditions, which, if favourable, can yield nodules containing lobsters and especially crabs.

♦ From Junction 1 of the M2, take the A289 towards Wainscott. This will bypass the busy town of Rochester.
When you reach the large Four Elms Roundabout at Wainscott, take the A228 heading north towards Hoo St Werburgh.
♦ Continue until you reach Middle Stock, where you will see signposts to Allhallows. Drive through the village and continue until you reach Allhallows-on-Sea.
♦ Just before the sharp bend in the road, you will see a large holiday park. Parking is permitted just before the entrance or you can pay a small fee to park inside.
♦ A public footpath will take you through the middle of the holiday park. However, this is poorly signposted. If you stay on the main road through the site, take the first right and the road will eventually descend to the shore.
Walk along the seawall to the opposite (western) end of the holiday park and descend onto the foreshore. This is the best area to collect from
♦ Ref: 51.47888°N, 0.63803°E

FIND FREQUENCY:♦♦♦
Allhallows-on-Sea can sometimes yield a good number of specimens, but beach conditions need to be favourable. The London Clay is not always exposed here. The most common finds are crabs in nodules, which are best collected from the upper foreshore.
CHILDREN: ♦♦♦ – Getting to the location is a fairly long walk and there are no toilets. The foreshore is very muddy and may not be suitable for smaller children. Having said this, if you are staying at the local campsite, you will have access to the onsite facilities, with only a short walk to the site.
ACCESS: ♦♦♦ – The public footpath through the site is a fair walk and, once you reach the shore, you then have to walk all the way to the other end of the park. The total walking distance is just less than 2km, but it is possible, on payment of a small charge, to park within the park nearer to the site. Ask at the security gates.
TYPE: – Fossils are found on the foreshore, mostly on the upper foreshore. However, the London Clay is only exposed occasionally and tends to be rather silted up. Therefore, collecting is difficult most of the time.

Allhallows-on-Sea does not have the usual diverse range of London Clay fossil species that other locations tend to have. This, combined with the clay only being exposed occasionally, makes this site not one which should be at the top of your agenda. However, if you are staying at the holiday park or are looking for an alternative London Clay site, this location is worth a visit.

Fossils are mostly found in areas of shingle on the muddy foreshore. However, it can be very difficult to collect, as the beach can be silted up and the pebbles are covered in algae. There is only one species of shark (or indeed vertebrate) found here (Striatolamia macrota) and these teeth are uncommon.

The most common fossils are actually crabs, which are found within phosphatic and septarian nodules. The species that can be found here are: Basinotopus lamarcki, Goniochele angulate, Portunites incerta, Xanthilites bowerbanki and Zanthopsis leachi. One species of lobster can also be found (Hoploparia gammaroides). These, together with a few trace fossils, are the entire list of fossils that have been found here.

This site exposes London Clay (Eocene ~50 mya) from Division D. There are no cliffs and the London Clay is not always exposed. Occasional areas of in situ sectarian nodules can be seen along the foreshore.

Common sense when collecting at all locations should always be used. This location is generally safe, although deep mud is present nearer to the water’s edge at low tides. Collect only from the upper foreshore to avoid getting stuck. The walk along the seawall can be slippery and care should be taken when walking down the large number of steps that are covered in algae and seaweed.

You don’t really need any tools here to collect, as most fossils can be picked up from the foreshore. Knee pads may be useful.