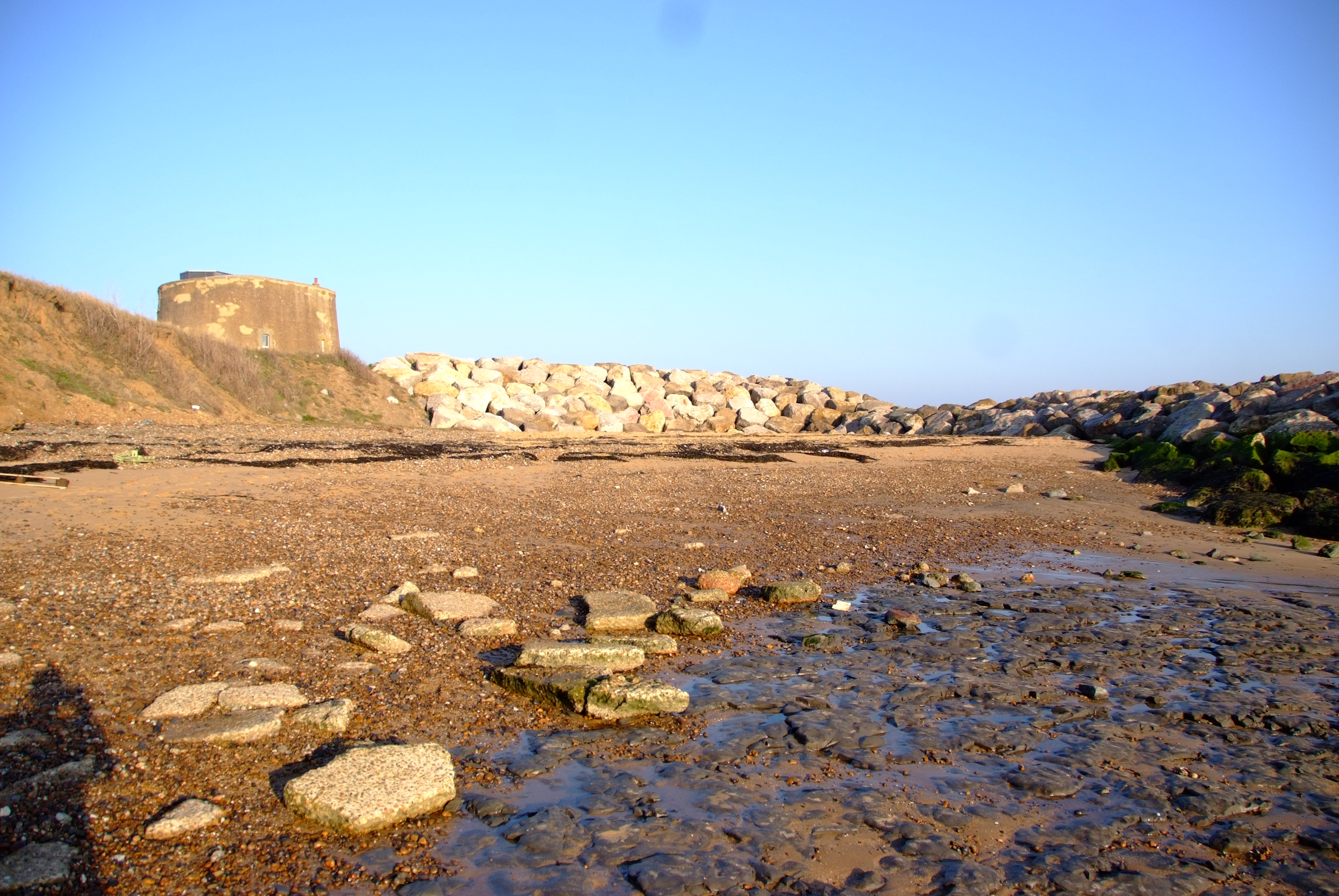 It has only been in recent years that Bawdsey is once again being washed out by the sea, but this time it is a small cliff north of the famous (now overgrown) Red Crag cliffs. However, the London Clay on the foreshore is rich in fish, bird and shark remains.

♦ Follow the B1083 into Bawdsey and turn into East Lane. Follow this road and park in the car park at the end of the road.
♦ Walk back along this road and take the road leading to the tower on the left hand side (as the old coastal footpath is now closed).
♦ Follow this path until you reach the tower. You can gain access to the foreshore by either climbing down near the granite blocks or by walking along the footpath until you reach the end of the cliff, where the footpath goes down to the beach. The London Clay is nearly always exposed on the foreshore.
♦ Ref: TM 35542 39618

FIND FREQUENCY: ♦♦♦♦ – Bawdsey is extremely rich in fossils, but most of the fossils are only found when sieving the clay that surrounds the fossil wood that can be found on the foreshore. This clay is highly fossiliferous, but without sieving, you will find very little.
CHILDREN: ♦♦♦♦ – This location is suitable for families. Sieving is also something that all the family can enjoy at home, so be sure to take back some samples.
ACCESS: ♦♦♦ – Although Bawdsey is easy to find, the relevant area can be hard to access depending on the state of the cliffs and beach. You may have to walk a small extra distance to gain access to the beach.
TYPE: – Fossils are mostly found on the foreshore, but can also be found in the cliff and the scree. Crag fossils are mostly found in the cliff and those from the London Clay on the foreshore.

The London Clay is highly rich in bird and fish remains, but reptiles and sharks’ teeth can also be found. From the Red Crag, molluscs can be collected along with derived fossils. Bawdsey also has some of the most well-preserved fossil wood in the London Clay and it is from around these fossils that the fish, reptile and bird remains can be found by sieving samples of the clay. Vertebras are also common and can get to quite a size.

Some of the larger fossils can be found on the shingle, especially in nodules that often contain well-preserved fossils. It is a hands-and-knees job to find them. Many of the smaller fossils, including small sharks’ teeth and loose fish remains, become broken up and you will only find half vertebras, and the teeth without their roots or the roots separate. For the best examples, you need to find these in situ or from samples that you take home to sieve. Treat any find as soon as possible.

You can also find Red Crag fossils, including fragments of bone in the shingle on the foreshore and these are much better preserved.

To make the best finds, you need a low tide or scouring conditions when the foreshore is stripped of sand. Search the clay and look around the areas where there is fossil wood. Most of the fossils are so fragile that, unless you are careful, they will break up. It is highly recommended that you take back samples and wet sieve at home. Most of these areas contain fossils of some sort and often you can find remains of complete fish, bird bones and reptile remains.

If you are interested in crag fossils, search the scree slopes at the base of the cliff, as they are full of shells and derived fossils. Occasionally, you can find sharks’ teeth, fish remains and crustaceans from the basement bed.

At the base of the cliff and foreshore, the Eocene London Clay (Ypresian age of 54 Mya) is exposed along the cliff at East Lane. Above this, the cliffs consist of both Pleistocene gravels and Pliocene Red Crag of Piacenzian age (approximately 2.5 Mya).

Pockets of shell beds and the London Clay basement bed yield a variety of molluscs, sharks’ teeth, fish remains and fragments of lobster.

Common sense when collecting at all locations should be used and knowledge of tide times is essential. The main issue to be aware of during scouring and exceptional high tides is being cut off. Also, be careful of any cliff falls, as these can occur suddenly without warning.

The vast majority of fossils are found around deposits of pyritised fossil wood. Your best chance of finding them is to use a shovel and scoop out samples into bags to take home and wet sieve.

There are no restrictions at this site, but please follow our code of conduct below.
It is important to follow our ‘Code of Conduct’ when collecting fossils or visiting any site. Please also read our ‘Terms and Conditions‘