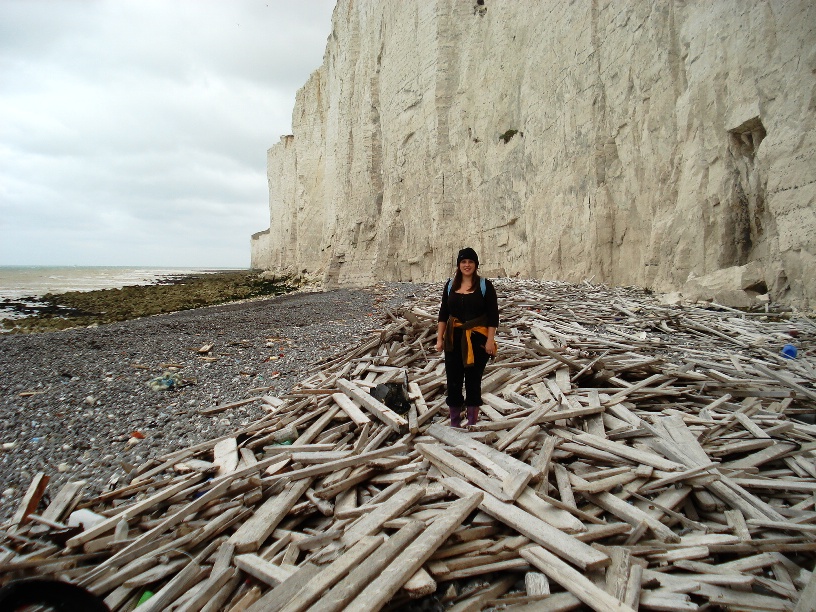 This is a classic British chalk location and a must for experienced fossil hunters. This guide concentrates on access from Cow Gap to Beachy Head. Over just a relatively short distance, fossils can be collected from the White Chalk Subgroup and Grey Chalk Subgroup. Please refer to the Eastbourne guide for the Eastbourne to Cow Gap section.

♦ Parking can be found at the Beachy Head Main Car Park, found along Beachy Head Road, South West from Eastbourne.
♦ Take the footpath down to Cow Cap, eventually, you will arrive at some steps at ‘Cow Gap’, which give access to the foreshore. For a slightly easier route, read our Eastbourne guide, which explains how to access the site from Eastbourne Parade, along the foreshore. However, this route can be quite rocky and there is a risk of getting cut off by the tide.
♦ As you walk along the beach to the lighthouse, you can stop to examine fallen Lower Chalk blocks for fossils. However, it is advised that you first walk all the way to the lighthouse and start fossil hunting as you head back. This is to avoid becoming caught out by the tide.
♦ Ref: TV 58986 95819 – 50.740222, 0.251864

FIND FREQUENCY: ♦♦♦♦ – Fossils are rare between Beachy Head lighthouse and Birling Gap, so we do not recommend collecting here, particularly due to the dangers along this particular section. They are far more common in the rock falls behind the lighthouse and between the lighthouse and Cow Gap.
CHILDREN: ♦♦ – The walk to the fossil hunting areas is quite long and can involve scrambling over boulders. The rock falls near and behind the lighthouse should not be climbed by children.
ACCESS: ♦♦ – Access to Beachy Head is difficult. The walk is long and in places steep, with a final set of steps at the end. It is even harder during windy or wet conditions. You can access Beachy Head from Holywell Cafe in Eastbourne, but due to the dangerous tides, we have covered this section in the Eastbourne guide. Fossil hunting between Cow Gap and Beachy Head does require climbing over large and often slippery rocks.
TYPE: – Fossils are mainly found in fallen chalk boulders. In addition, you should look out for flint fossils (especially, the heart-shaped Micrasters) in the shingle on the beach.

Although a difficult location, Beachy Head is highly recommended for Chalk fossil lovers. Within a relatively short distance, fossils from the Chalk Upper Greensand can be collected – a rare opportunity.

Flint pebbles will also occasionally contain fossils, especially of the heart-shaped urchin, Micraster. There is a wide range of species to be found at this location. Echinoids, brachiopods, bivalves, corals, worm tubes, ammonites and belemnites are all present to varying degrees. This is a diverse location for fossils.

The earliest deposits at Beachy Head belong to the Upper Gault, a dark grey, sticky (when wet) clay dating from the Upper Albian stage, approximately 103 Mya. Resting above the Gault clay but below the overlying Chalk is the Upper Greensand, a course sandy sediment visible on the foreshore, again from the Albian stage of 100 Mya.

Overlying the Upper Greensand is the White Chalk Sub-Group, represented by the West Melbury Chalk Formation (Cenomanian stage of c.98 Mya) including the Glauconitic Marl Member at its base.

Where the Zig Zag Chalk formation reaches beach level, at Hedge Ledge, the Plenus Marls (named after the belemnite, Actinoclamax plenus) can be seen, exposed on the foreshore, a short distance from the lighthouse.

There is no way off of the beach between Cow Gap and Birling Gap. We do not recommend visiting the section from Beachy Head to Birling gap from Cow Gap (rather, you should access it from Birling Gap). Fossils are not that abundant and the tide reaches the base of the cliffs. There are recorded instances of people drowning along this section. The Cow Gap to Beachy Head section should be visited on a falling tide. Parts of the beach get cut off up to two and a half hours before high tide – so be very careful. Do not hammer the cliff faces and wear a hard hat if you are near to them. The foreshore can be slippery due to mud and weed, and good shoes or walking boots are recommended. Mobile phone signals are poor or non-existent – make sure you tell someone where you are and what time you expect to be back.

Most fossils at Beachy Head can be found on the foreshore or at the base of the cliffs, which have come from the fallen rocks and scree slopes. You will need a hammer and chisel to get a lot of the fossils out of the chalk blocks.