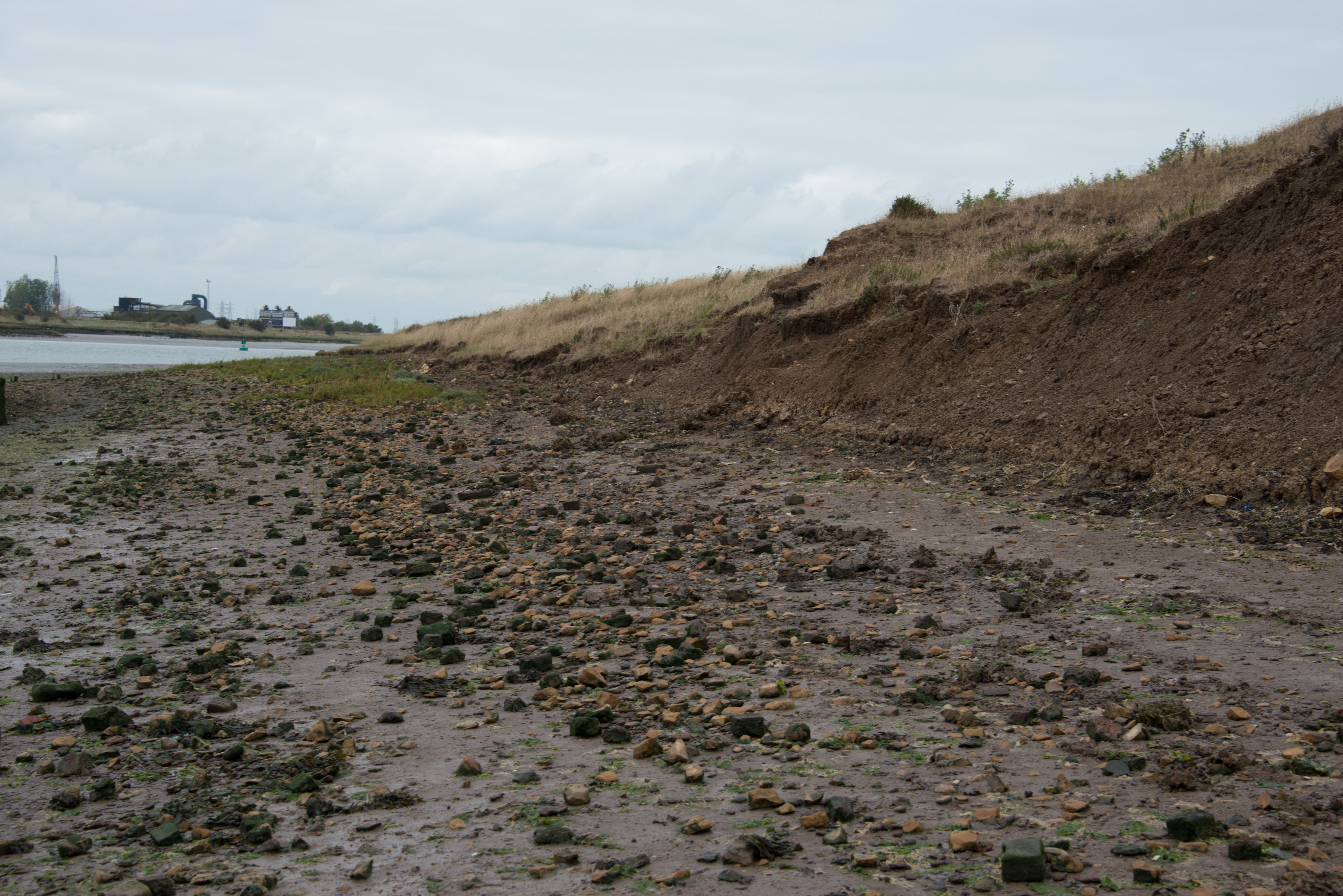 Elmley Hill is situated on the south side of the Isle of Sheppey, on the opposite side to the classic London Clay section of Minster to Warden Point. It is not a particularly rich location for fossils, but nevertheless, some important finds have been made over the years. Getting to this location involves a long walk.

♦ The location is best accessed from the old B2231 road, which uses the smaller Kingsferry Bridge. (This used to be the main bridge onto the island before the newer A249 bridge was built.) From the mainland, just before you reach the bridge, you will find a slip road, signposted to the docks. Take this road and, at the roundabout, go straight over and cross the bridge.
♦ Continue along the B2231 until you reach the road to Straymarsh Farm, which is on the right and where there is also a signpost to the nature reserve. Take this road. However, if coming from Sheerness on the A249, at the last roundabout before the main bridge, take the first left and then turn right at the second roundabout. The nature reserve will then be on your left.
♦ Follow the old road until you reach the farm cottages. Instead of turning off to for the nature reserve, stay on the road and following it round all the way south until you reach a dead end next to the water’s edge. Park here and take the public footpath to the south along the embankment.
♦ Follow the footpath. You will have to negotiate several stiles and gates. It is a long walk, but you will eventually come to an area with the remains of an old industrial building. The large concrete blocks, a slipway and concrete foundations are a good indication that you are getting closer.
♦ Continue following the path following the embankment along the water’s edge. You will soon see Elmley Hill. There is access to the foreshore just before the hill and you can collect from the foreshore both to the south and north of the cliffs.
♦ Ref: 51°22’16.1″N 0°45’52.8″E

FIND FREQUENCY: ♦♦♦ – Most of the fossils found at Elmley Hill tend to be lobster fragments and fish remains within phosphatic nodules. These are not that common, but fossils can also be found in the embankments along the walk, which are made up of dredged London Clay.
CHILDREN: ♦ – As well as the long walk to the site, once at Elmley Hill, the foreshore is extremely sticky and can be very hard to walk on, especially when the clay starts to accumulate on one’s boots. For this reason, we don’t recommend this site for younger children.
ACCESS: ♦ – The site has poor access due to the long walk, but, if you enjoy walking or bird watching, this is a good site to visit. The area is also a nature reserve that is home to a number of important birds. The walk is around 3.2km and there is a fairly steep descent from the embankment to the foreshore. The location is within a nature reserve and may also be on private land. Because of this, only groups of four or less are recommended to visit at any one time. Larger parties should seek permission possibly from the nature reserve.
TYPE: – Fossils are found on the foreshore and in the cliff, but mostly from the areas of shingle exposed along the upper foreshore. Along the walk, lobster fragments can also be collected from phosphatic nodules within the embankment along the river.

Your first chance of finding fossils is actually along the walk to the site, particularly the first half of the walk, where the embankment wall has been more recently dredged than the second half, which is badly overgrown. Lobster fragments in phosphatic nodules can be found, along with other fossils. These tend to be washed out by rain, from time to time.

Once you arrive at Elmley Hill, you will see cliffs of London Clay and a very sticky foreshore. This is has areas of shingle and pyrite, where you are most likely to find fossils. This pyritic shingle extends some way south along the foreshore. Within the shingle, loose fossils of crinoid stems, sharks’ teeth and crabs can be found. Phosphatic nodules with lobster fragments can also be found along the extensive London Clay platform.

This site exposes London Clay from Division B1 and B2. This is the same division as Herne Bay and Tankerton, but sadly nowhere near as productive

Common sense when collecting at all locations should always be used and prior knowledge of tide times is essential. Do not venture out onto the lower foreshore, as this is badly silted up and very dangerous to walk on. The water also reaches the base of the cliff at high tide, so it is recommended that you visit on a falling tide. It is unlikely that you will be cut off, but care should be taken. Finally, there is a steep descent from the embankment to the foreshore.

You don’t really any tools here too collect, as most fossils can be picked up from the foreshore. However, a small trowel and specimen bags are handy. Remember to take a mobile phone and plenty to drink due to the long walk.

There are no restrictions to this site, however, it is important to follow our ‘Code of Conduct’ when collecting fossils or visiting any site. Please also read our ‘Terms and Conditions‘