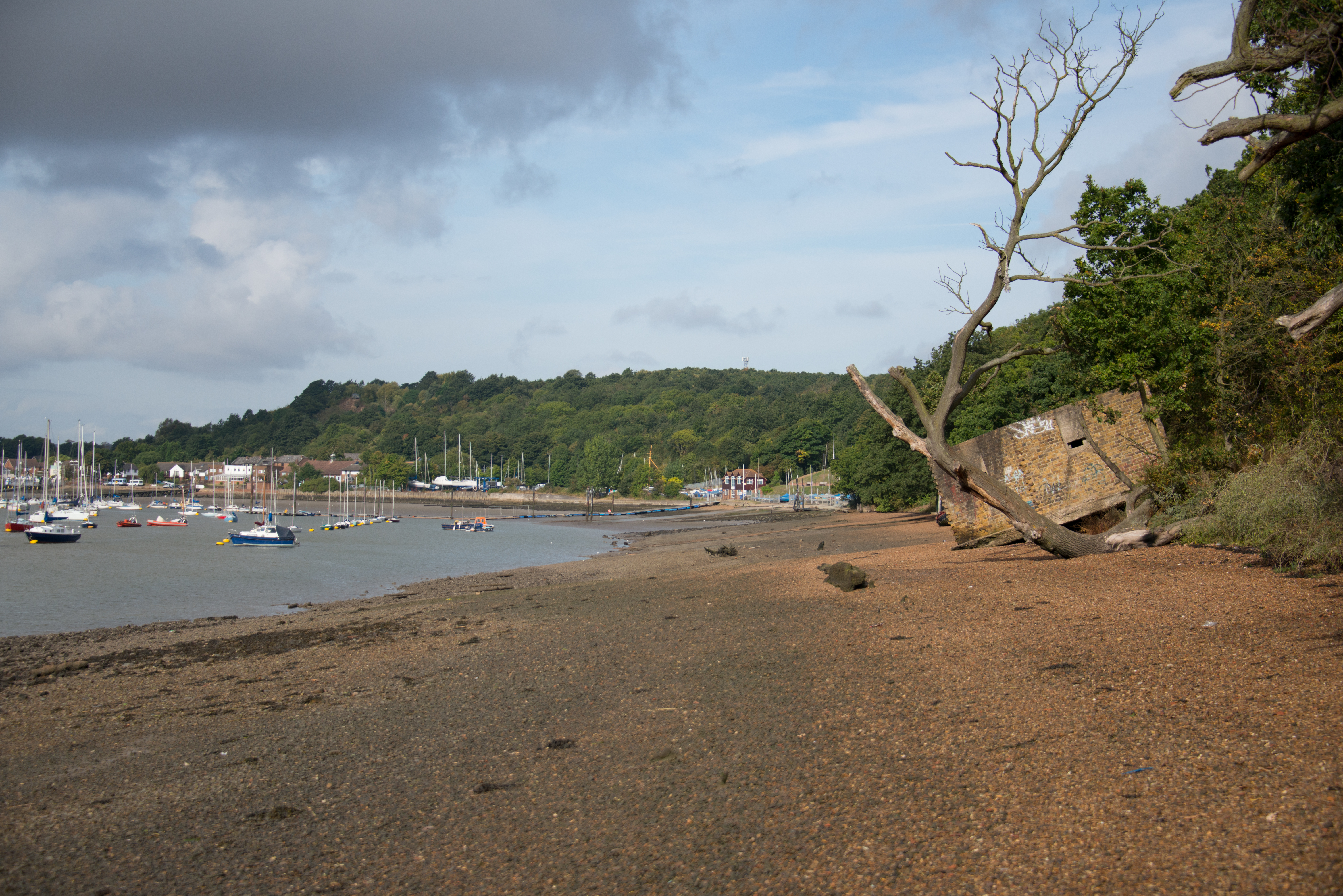 Lower Upnor is probably the most unproductive of all the London Clay sites in Kent, but is situated not far from the Isle of Sheppey and also along the route to Elmley Hill, both of which are covered on this website. Not only do the cliffs contain a lot of vegetation and are badly slumped, but the foreshore often covered in rubbish and the beds here are also from the less productive Division B1 of the London Clay. However, there are still fossils to be found.

♦ From Junction 1 of the M2, take the A289 towards Wainscott. This is the northern Rochester bypass.
♦ When you reach the large Four Elms Roundabout at Wainscott, continue straight over staying on the A289 and head towards the town of Rochester. Continue until you reach a second roundabout and then take a left hand turn, heading towards the Medway Tunnel.
♦ Immediately after this, take the next turning on the left to Lower Upnor. Note that, at this point, you cannot access this road northbound. Therefore, if heading from the Medway Tunnel, you will need to do a U-turn at the A289 roundabout to ensure you are on the southbound side.
♦ From the turnoff, follow signposts to Lower Upnor, continuing all the way to the end of the road, where there is a free car park. This is just before the yacht club. Then, walk eastwards along the seawall beside the yacht club, until you reach the foreshore.
♦ Ref: 51.38299°N, 1.28904°E

FIND FREQUENCY: ♦ – Don’t expect to find many (if any) fossils at this site. You can spend hours searching the foreshore and still come away with nothing. However, when you first visit the site, it looks like a good potential location for London Clay fossils, but is actually very poor.
CHILDREN: ♦♦♦ – This location is a short walk from the car park and has quite a large beach, which is suitable for older children. Young children, if visiting this site, need to be kept under supervision as there are areas of deep clay, especially along the lower foreshore.
ACCESS: ♦♦♦ – There is a free car park nearby and it is an easy walkway along the top of the sea wall towards the cliffs. As soon as you go down onto the foreshore, you can see the low cliffs of London Clay with some patches also exposed on the foreshore.
TYPE: – Fossils are found on the beach, mostly on the upper foreshore. The London Clay is only exposed occasionally and the beach contains a lot of rubbish making collecting more difficult. There are low, discontinuous cliffs of London Clay running for about 300m. However, they are mostly slumped or covered in vegetation.

This is generally a poor site, but sharks’ teeth and phosphatic nodules are occasionally found, mostly among the shingle along the upper part of the foreshore or washed out at the base of the small cliffs.

Trace fossils, the lobster Hoploparia gammaroides, two species of crabs (Portunites incerta, Zanthopsis leachi), bivalves and gastropods have all be documented from this site. However, while sharks’ teeth have been found here, they have never actually been documented. Therefore, the site really needs further research.

This site exposes London Clay from Division B1. The clay can clearly be seen in the low cliffs and also in patches along the foreshore. Phosphatic nodules can also be found here.

Common sense should always be used at every location. This site is generally safe, although deep mud is present nearer to the water’s edge at low tides. Collect only from the upper foreshore to avoid getting stuck. The foreshore can also contain a lot of rubbish, sometimes with sharp objects. If searching the foreshore on your hands and knees, we recommend the use of knee pads.

You don’t really any tools here to collect, as most fossils can be picked up from the foreshore. Knee pads may come in useful.