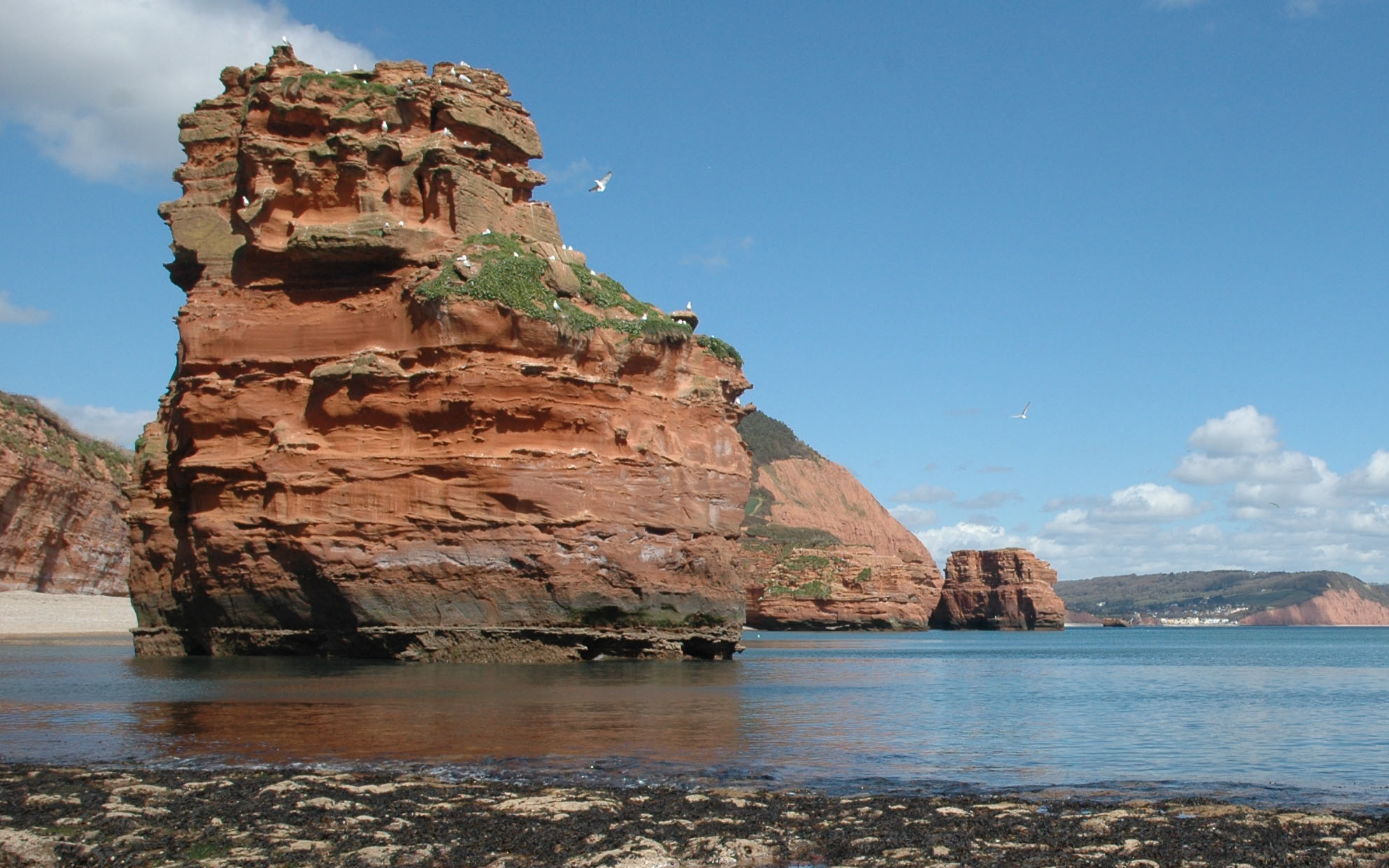 Sidmouth is an important Triassic site, where the rare remains of ﬁsh, amphibians and reptiles can be found, with easy access down to the shore. Most specimens have been recovered from fallen blocks, but a few have been found in situ. Bones and footprints of the labyrinthodont, Mastodonsaurus lavisi and a rhynchosaur, Fodonyx spenceri, have also been found on the foreshore.

♦ From the A3052, Sidmouth can easily be reached from the B3176. Follow the road all the way through Sidmouth.
♦ Car parking is directly opposite Chit Rocks along Peak Hill Road and in nearby car parks. Access to the site is at low tide from the coastal path. There is also car parking at the nearby campsite and caravan park at Ladram Bay, from where there is direct access down to the beach or the coastal path.
♦ Ref: 50.674901, -3.2573269

FIND FREQUENCY: ♦♦ – Fossil collecting at Sidmouth is not going to be too productive to the casual collector and must be conﬁned solely to the loose blocks found on the beach, due to the sensitivity of this scientiﬁcally important site. Having said that, finds are constantly being made, and most collectors will come back with something.
CHILDREN: ♦ – The rocky foreshore and tidal conditions makes this an unsuitable site for children.
ACCESS: ♦♦♦ – The rocky foreshore can make the site difficult for some people. However, from the car park, there is a quick and easy, direct route down to the shore.
TYPE: – Although there are cliffs at this site, the location is a very important site, so collecting is only permitted from loose material along the foreshore.

The Triassic rocks displayed below High Peak have yielded very rare remains of Middle Triassic ﬁsh, amphibians and reptiles. Most specimens have been recovered from fallen blocks, but a few have been found in situ. Bones and footprints of the labyrinthodont, Mastodonsaurus lavisi, and a rhynchosaur, Fodonyx spenceri, have also been found on the foreshore. Comparison of the fauna indicates an Anisian age for the Triassic Otter Sandstone Formation of 225myrs ago.

Fossil collecting at Sidmouth is not going to be too productive to the casual collector and must be conﬁned solely to the loose blocks found on the beach, due to the sensitivity of this scientiﬁcally important site. The pebble lags (the conglomerates generally conﬁned to the basal part of a channel ﬁll during sediment deposition) are the best place to look. It is a geologically important site and one of only a few Triassic sites in Britain. Fossils likely to be found are rhizoconcretions, that is, the roots of Triassic plants. However, most fossils, including any bone, are only fragmentary.

The cliffs at High Peak are the eroded face of Peak Hill, directly to the west of the town of Sidmouth. This is a 118m-thick, Triassic sequence of largely ﬂuvial sandstones, including breccias and thin mudstones layers. At High Peak, the uppermost part of the cliffs is Cretaceous Upper Greensand, overlying the Triassic Sidmouth Mudstone Formation (formerly the Mercia Mudstone) in the centre of the cliff, with the Otter Sandstone Formation below.

The Triassic sediments at Sidmouth were laid down in a vast, sandy desert ﬂoodplain, covered with small ephemeral braided streams and lakes, with a semi-arid climate, that allowed long dry periods punctuated by seasonal rains and ﬂash ﬂoods. The Otter Sandstone Formation was deposited on the bottom of these shallow, oxygen-rich rivers and was an environment far from ideal for the formation of fossils.

The fresh water of the temporary rivers and streams would have been home to ﬁsh and amphibians, with vegetation along the edges. When the water stopped ﬂowing, the sun drew moisture out of the ground and, in the process, minerals such as calcium cemented the ground around the roots of plants, forming ‘rhizoconcretions’, which can occasionally be found on the beach. The fauna is dominated by skeletal material of a group of medium sized herbivorous reptiles, known as rhynchosaurs.

You do not need any tools here and hammering is not permitted. However, the best fossils are found by simply picking them up off the foreshore. Bring a specimen box and some paper or tissue to wrap any finds.

The cliffs are prone to sudden collapse and falls are frequent. Keep away from the base of the cliff at all times and only collect from the foreshore.

This site is a site of special scientific interest (SSSI). This means you can visit the site, but hammering the bedrock is not permitted. For full information about the reasons for the status of the site and restrictions, download the PDF from Natural England. Conﬁne any foreshore collecting to fallen blocks on the beach and especially the lag conglomerate deposits.

Last inspected 2016, Updated 2017, Written by Craig Chapman. Edited by Jon Trevelyan 2016. Thanks go to Sidmouth Museum for the specimen images..