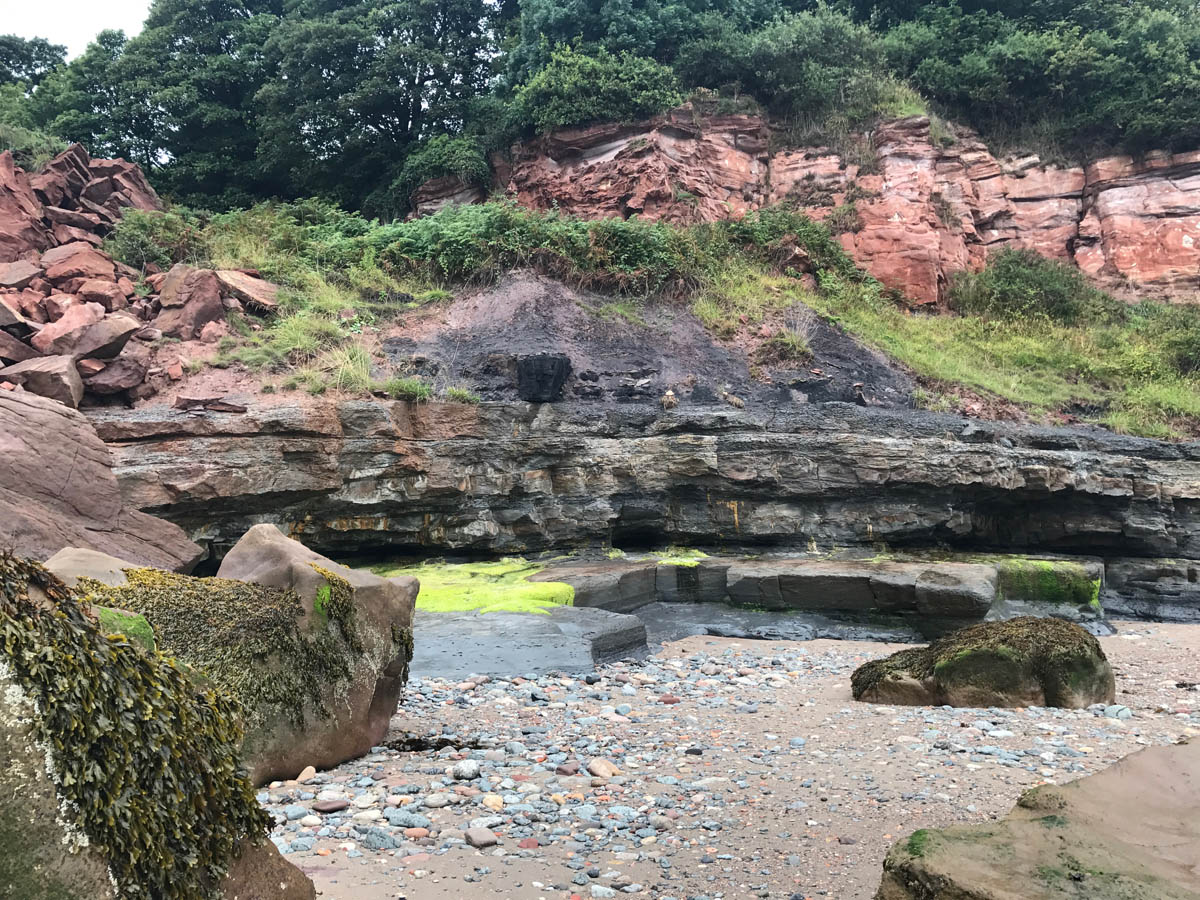 Unlike East Wemyss, where the cliffs are cut from a disused spoil heap, at West Wemyss, the cliffs contain in situ Carboniferous beds. There are very few locations in the UK where there are coastal sections of the actual coal measures. You can see very distinctive coal seams, and layers of harder rock and shale. The shale, both in the cliff and on the foreshore, is highly fossiliferous with plant remains.

♦ West Wemyss can be found to the northeast of Kirkcaldy. Follow the A955 coastal road towards Buckhaven. West Wemyss is signposted just before the Coaltown of Wemyss.
♦ Follow the road marked on OS maps as ‘West Wemyss Toll’, although this is actually not a toll road.
♦ you get to the bottom of the cliff and go round a sharp bend, the car park is to your right. There is a second car park further round the bend at the end of the road, but this entails a longer walk.
♦ From the car park, walk past the harbour along the embankment until you reach the cliffs. Fossils can be found immediately here and in the next bay.

FIND FREQUENCY: ♦♦♦♦♦ – Fossils from West Wemyss are common. There are plenty of plant remains to be found both in the foreshore exposures and eroding out of a spoil heap cliff a little further along the bay.
CHILDREN: ♦♦♦♦ – West Wemyss is suitable for children, but care must be taken near the tall and unstable cliffs.
ACCESS: ♦♦♦ – West Wemyss has good access to the beach, although there is a bit of a walk from the car park to the cliffs. However, it is along an embankment that is easy going.
TYPE: – Most fossils are found within the shale on the foreshore. However, you will need a chisel pick to split the shale apart, along with safety glasses. Fossils can also be found loose amongst the shingle and cobbles.

When you first reach the carboniferous cliffs, you will notice distinctive layers of shale, hard ironstone blocks and coal seams. The cliffs here are very tall, unstable and too dangerous to collect from. A little further round the corner, the cliffs are lower with foreshore shale exposures. Here is the best and safest place to collect from, with the best plant remains.

The plant remains tend to be found in pockets. At first sight, the shale appears to be unfossiliferous, but once you find a good section, it will be full of stems and leaves.

A little further on and the cliffs become jumbled up with spoil waste, eroded by the sea. Here, you can find a mixture of marine and non-marine fossils. Blocks can be found among the foreshore, but also mixed with quarry rubbish, such as bricks and other manmade material.

Chunks of tree trunk can be collected from the foreshore. In addition, bivalves, such as Unio can be found in the marine bands.

Search along the foreshore for chunks of tree trunk. These can often be picked up and some of them can be in superb condition and are often not too big to carry.

The rocks exposed at West Wemyss are not dissimilar to those at East Wemyss. However, some coal seams can be seen in situ in the cliffs. Other rocks are from spoil heaps from the closed Michael Colliery, along with manmade accumulations of dumped rock and rubbish.

The fossiliferous rocks are being washed from the spoil heap and, within the spoil, is mining waste from a variety of different bands. These include both marine and non-marine deposits, formed by sediment (sands and silts) carried and deposited by rivers across the region.

The coast at East Wemyss and beyond exposes the Scottish Middle Coal Measures Formation, which formed 310 to 312mya. The rocks are sandstone, siltstone and mudstone laid down in repeated cycles, which most commonly coarsen upwards, but can also fine upwards locally, with seatclay or seatearth and coal at the top. They are Upper Carboniferous from the Duckmantian Substage of the Silesian.

Common sense when collecting at all locations should always be used and prior knowledge of tide times is essential. Take care when visiting this location, as the cliffs are tall and unstable.

Most of the fossils can be found by splitting the soft shale with a chisel pick (and safety glasses). However, you will need plenty of paper to wrap the plant remains carefully and ensure that you treat these with consolidating material as soon as possible. The best advice is to try to take whole blocks of fossiliferous shale back home, split these open and preserve the fossils immediately. Some fossils can be found just lying on the foreshore, such as chunks of tree trunk and so on.