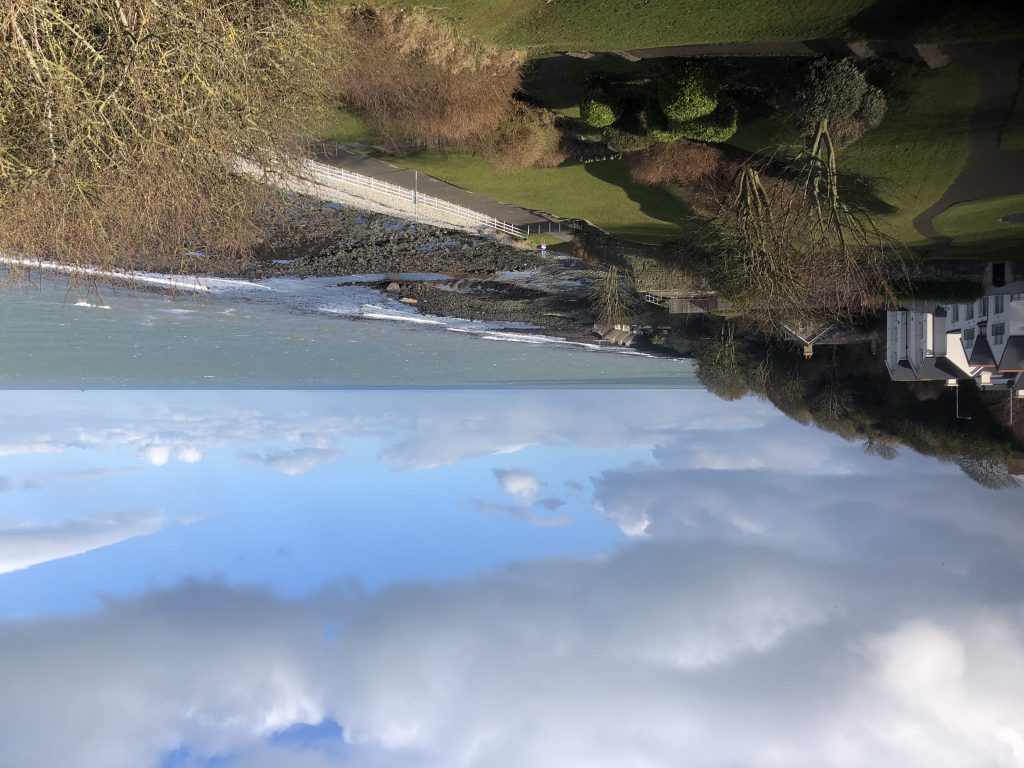 Just outside of Larne town centre and north of Larne harbour, Co. Antrim is Waterloo Bay, where important exposures of Triassic and Jurassic rocks can be found, specifically the Waterloo Mudstone Formation, part of the Lias Group. Although the Triassic Penarth Group rocks are not particularly fossiliferous, the blue lias yields early Jurassic fossils including ammonites, belemnites and gryphaea. The cliffs and platforms are protected however many washed out loose fossils can be found.

♦ Waterloo Bay is just outside of Larne. Follow the A2 Glenarm Road northwards and you will soon pass a petrol station on the left. Just beyond, on the right hand side, are the gates for the Town Park. Approximately 200 yards beyond the gates, on the right, is the entrance to a car park.
♦ Access to the beach is by a sloped and stepped paved path which leads from the far end of the car park towards the sea. Where the path forks at the T-junction, take the left hand branch northwards down towards the bandstand then continue past the bandstand until you reach a short path on the right with steps down to the promenade and seafront.
♦ 54°51’32.8″N 5°48’29.0″W
♦ Nearest postcode: BT40 1DZ
♦ NT 27940 88479

FIND FREQUENCY: ♦♦♦ – Ammonites and bivalves (including Gryphaea sp. And Plagiostoma sp.) are the fossils most commonly yielded by the mudstones, however marine reptile remains including plesiosaurs and ichthyosaurs have been found at this location, including the most complete ichthyosaur to be found in Northern Ireland.
When emerging from the footpath onto the beach you will see exposures of lower Jurassic liassic Waterloo Mudstone Formation stretching out before you. Searching to the left and right of the beach access is most profitable; heading southwards past the promenade and towards the leisure centre will take you on a journey back in time from the early Jurassic to the late Triassic. As you progress further back in time, the fossils become scarcer, with thin layers of shells with some fish scales and teeth in the black shales of the Westbury Formation. Beyond this only a few microfossils are found, however the geology is interesting to see.
CHILDREN: ♦♦♦ – The footpath access is safe and easy to walk on and access is not steep or difficult, being paved and involving few steps along its approximately ½ mile stretch. Once on the beach, the mudstone ledges can be slippery and uneven so require some care. Searching for fossils involves looking in the surface clay or among loose pebbles.
ACCESS: ♦♦♦♦ – From the car park it is around a 1/2 mile walk to the beach. The path is not steep or difficult and is paved but includes some steps. The beach is composed of liassic clay ledges which can be slippery and uneven, especially where seaweed and rock pools are also present.
TYPE: – Fossils are found in the foreshore exposures of lower Jurassic liassic mudstone.

Fossils from the lias can be found when the lias is exposed.  Ammonites are often pyritised and fragile but bivalves can be extracted quite easily. Gryphaea are particularly common and can be found loose on the foreshore. Collecting should be limited to loose fossils and fossils in loose blocks as the bedrock and cliffs are protected by SSSI and cannot be hammered.

The rock forming the coast around Waterloo Bay are some of the most interesting and complete exposures in Northern Ireland, comprising a sequence of around 10 million years between 205 mya. and 195 mya. which spans the late Triassic and early Jurassic at a time when Northern Ireland was positioned approximately where the Sahara desert currently lies. Starting at Waterloo Bay and working south past the promenade towards the leisure centre you encounter the Sinemurian and Hettangian lias of the Waterloo Mudstone Formation which was laid down in open sea and includes abundant marine fossils including zonal ammonites.  Continuing south past the Langport Member the fossils become less abundant, consisting mainly a few bivalves, however it was here that Northern Ireland’s most complete ichthyosaur specimen was found in 1999.

Beyond this are the paler sandstones of the Cotham member, in which 4m of layers are intensely contorted.  Those layers above and below are undeformed and this has been interpreted as evidence of an extremely violent earthquake event and catastrophic tsunami across the UK approximately 200 mya.  For this reason Waterloo Bay was awarded SSSI status in 1995. Continuing south, below the cliff that overlooks the promenade, the rocks are subceded by those of the Westbury Formation, marking the boundary between Jurassic and Triassic.  These almost black shales comprise thin layers containing remains of bivalves and fish scales and teeth, marking the point where the open sea finally inundated the Triassic lagoons that had typified the location previously.

Beyond the shales are the greenish-grey shales of the Glen Colin Formation which were laid down in shallow lagoons formed as the sea level began to rise and inundate the land.  These rocks contain only a few microfossils.  Approaching the leisure centre, you progress to the oldest rock exposures on the shore, the brick-red mudstones of the Mercia Mudstone Group.  Containing scattered green spots and thin veins of gypsum, these unfossiliferous rocks were formed in dry, arid conditions with shallow seasonal lakes, akin to parts of central Australia today.

Common sense when collecting at all locations should always be used and knowledge of tide times taken into account. The sea does reach the cliffs at high tide, so collecting should be done on a falling tide. Care must be taken getting down from the embankment as the steps may be slippery or dangerous in wet weather.

The site is SSSI so hammering the bedrock is not permitted and only loose fossils may be collected. You may wish to take a point to help lift out surface fossils and a chisel hammer is useful to split larger loose rocks but you may not hammer the bedrock as it is protected.

This site is an area of scientific interest (ASSI). This means you can visit the site, but hammering the bedrock is not permitted. For full information about the reasons for the status of the site and restrictions, download the PDF from The Department of Agriculture, Environment and Rural Affairs